As has long been feared, negotiations between Russia, Ukraine and the EU over Russian gas supplies to Ukraine have ground to a halt.

Despite last ditch negotiations over the weekend a deal did not materialise and the two sides remain some way from reaching a deal. Ukraine is willing to pay a price of $326 per 1,000 cubic metres, however Russia continues to demand $385. Russia also insists that Ukraine owes debts of $4.5bn, of which it wants $1.95bn paid immediately. Reports over the weekend suggested Ukraine (pushed by the EU) was willing to offer a $1bn payment immediately – an offer which was swiftly rejected.

What does this mean for Ukraine?

What does this mean for the EU? 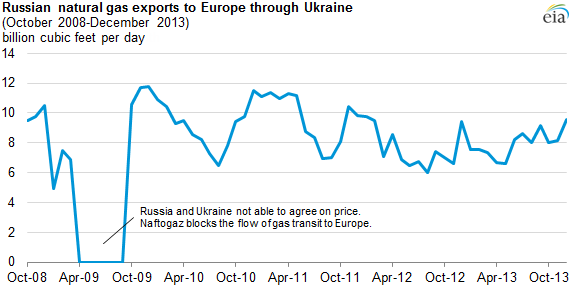 In the end, despite the current intransigence of both sides, it remains in their interests to strike a deal. Russia seems to have the upper hand at the moment but equally Ukraine remains an important market for it and pushing the country further away may only exacerbate the original issue it took exception to – Ukraine moving closer to the EU.

However, this state of affairs only holds as long as the gas continues to flow through Ukraine. If this stops, then the volatility of the situation would increase significantly and the incentives would shift radically (as we have said before, neither side would want a breakdown in energy relations between the EU and Russia). This is the key point to watch in coming days and months.