Has Marine Le Pen put Farage’s European Parliament group out of business (and out of pocket)?

UPDATE 16:10 – A spokesperson for Lithuania’s Order and Justice told EUobserver that the party “hasn’t had any discussions” with Marine Le Pen on a possible alliance. This confirms Le Pen remains at least one party short of forming a group in the European Parliament (see previous update).

UPDATE 14:05 – We are still waiting for an official confirmation that Marine Le Pen has managed to put together her new group in the European Parliament.

In the meantime, though, it seems the two Lithuanian MEPs from Order and Justice have denied reports that they are going to join forces with Front National. This would leave Le Pen’s group one party short of the required number. A Lega Nord spokesman quoted by Die Presse admits that “final discussions are still under way”, but still expects Le Pen to officially announce the creation of the group later this afternoon.
ORIGINAL BLOG POST

It looks like there could be a winner in the contest between Nigel Farage’s UKIP and Marine Le Pen’s Front National to gather as much support among the fringe parties elected to the European Parliament in order to be able to form (or in UKIP’s case maintain) a parliamentary group. Although there has not yet been any official confirmation, Giovanna Pancheri – the Europe correspondent of SkyTG24 – broke the news on twitter yesterday evening that the Polish KNP party (led by Janusz Korwin-Mikke) and the Lithuanian Order and Justice party had agreed to join Le Pen’s new European Alliance for Freedom Group.

Along with the FN, Geert Wilders’ PVV, Belgium’s Vlaams Belang, Austria’s Freedom Party and Italy’s Lega Nord, the EAF has enough member states to qualify for an official group. In total, the group will have 44 MEPs (24 of which are from the FN). Having a group means additional staff and funding, a high profile platform in the parliament, and possibly the right to some committee posts.
This means that, as Open Europe predicted a couple of weeks ago, UKIP’s Europe of Freedom and Democracy (EFD) group looks in serious trouble having lost the Danish People’s Party and the Finns party to the ECR and Lega Nord and now also Order and Justice to the EAF. 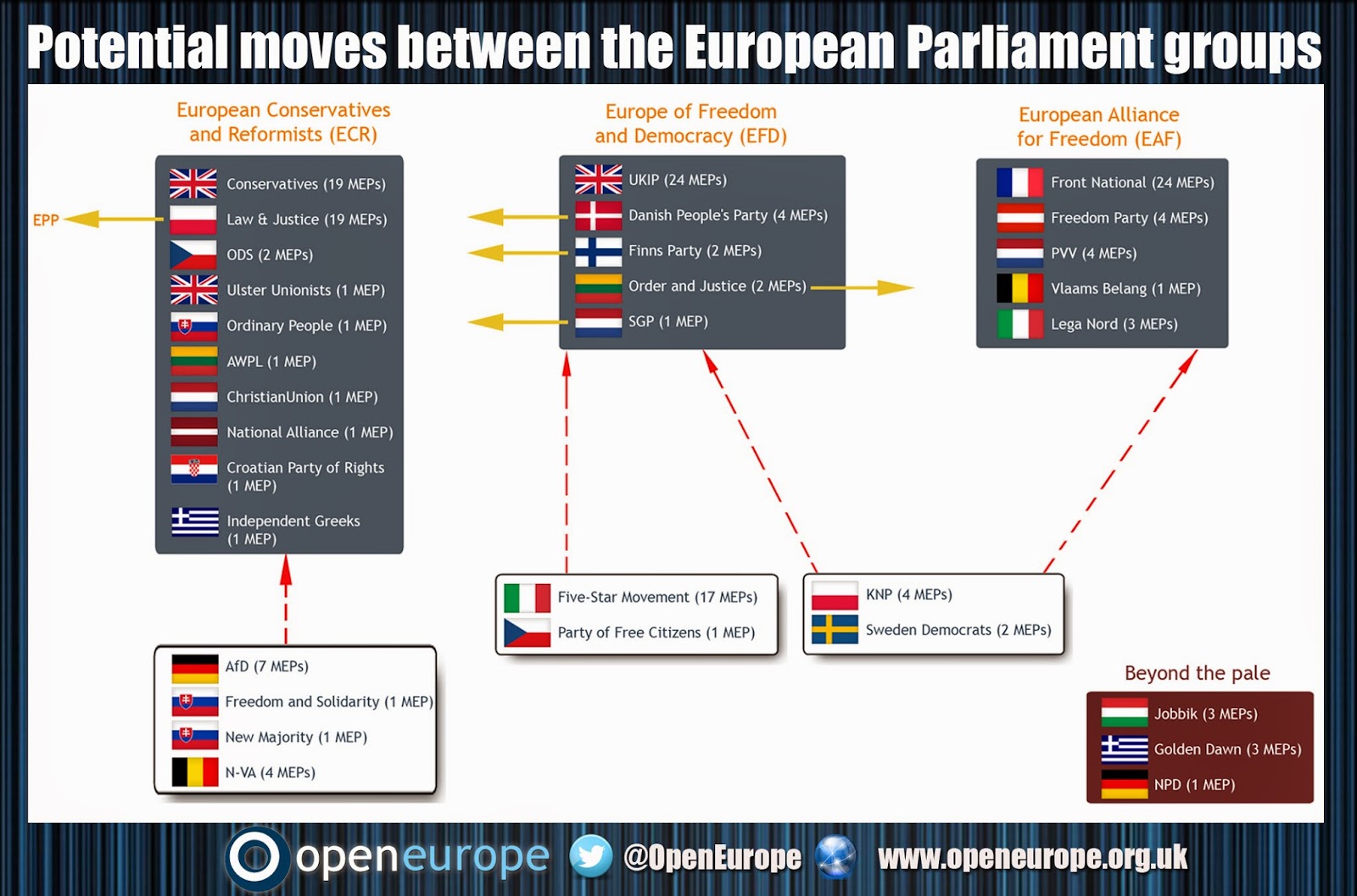 In theory, the EFD could yet survive if it holds onto its Dutch MEP, as well as getting Beppe Grillo’s Five Star Movement on board (which may prove difficult given its activists will have the final say), the Sweden Democrats, and a couple of other small parties and independents. If it manages to get MEPs from six different member states, it could also potentially secure a special dispensation under EP rules, but this would require the consent of the other group leaders (not sure we would fancy Farage’s chances!). While being forced to sit without a group would hardly be disastrous for UKIP politically, given that it has its eyes set on Westminster, losing millions of euros, a bunch of staff that can be used for campaigning and a high profile platform from which to attack the EU would hurt. Ukip better get busy searching for more donors.
However, despite Le Pen’s apparent success in emerging as the figurehead of the main anti-EU group in the EP, there remain a number of questions over the EAF’s durability. For a start, the PVV have made clear their unhappiness over Jean-Marie Le Pen’s recent anti-Semitic outburst (which is splitting the FN), while the addition of the highly volatile Korwin-Mikke could alienate more ‘moderate’ MEPs within the group.