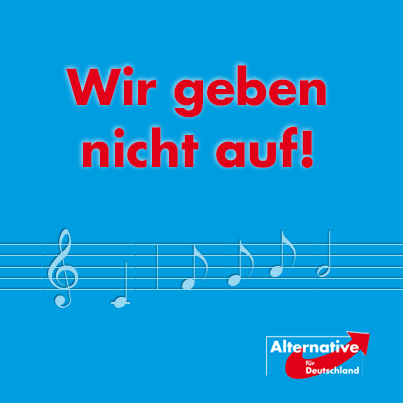 Relations between Berlin and London are potentially about to become a lot more complicated.

The Tories raised some eyebrows last week when they allowed the Finns Party and Danish People’s Party – two parties with controversial histories, but who, according to Tory MEPs, have cleaned up their act – to join their European Conservatives and Reformers (ECR) group in the European Parliament.

Even more eyebrows could be raised soon as it now looks highly possible that Alternative für Deutschland (AfD) will also join the ECR.

A vote amongst ECR MEPs is imminent. Number 10 isn’t keen at all on the idea, but doesn’t actually have a veto over who joins. That’s entirely down to a vote amongst the actual MEPs in the group, with a simple majority needed to approve new applicants.

Number 10 will probably try to make Tory MEPs vote against AfD, but the Tories account for only 19 of 55 ECR MEPs. Most non-UK MEPs will likely vote in favour of allowing AfD to join. This means Number 10 is effectively powerless, short of removing the whip from Tory MEPs or withdrawing from the ECR altogether. Cameron could try to hit the phones to the national leaders of the other parties to try to get them to convince their MEPs to vote against AfD. If successful, he could maybe still block AfD joining.

If AfD joins, it will be explosive. The party would bring seven MEPs to the ECR group, allowing it to potentially overtake the liberals, ALDE, as the third-largest group in the European Parliament (unless ALDE also gets some new recruits). An enlarged ECR would attract additional cash and staff, as well as more important committee posts. Also, the group may well become a more influential voice by virtue of being bigger, and therefore much harder to ignore. It can serve to put significant pressure on the European People’s Party (EPP) in particular. You can’t blame Tory MEPs for seeking to maximise their influence.

Also, the ECR strategy appears to involve a concerted effort to strip UKIP’s EFD group of its member parties, leading to the its collapse, depriving them of cash and demolishing their platform. Denying them the DPP, the Finns and AfD as members (assuming AfD would even want to join Farage) is a key part of the strategy – which seems to be working so far.

However, with AfD, as with the DPP and the Finns, there’s a big trade-off here: numbers versus image. With the Nordic parties, it was the risk of turning off allies on the liberal right, who are vital to achieving EU reform.

With AfD, it’s all about Angela Merkel. She doesn’t deal with AfD. In fact, she barely acknowledges its existence. She once said,

“We consider a collaboration [with AfD] to be out of the question.”

Merkel wasn’t happy when Cameron left the EPP-ED group to form the ECR in 2009. Now, joining forces with her arch-enemy will be like chucking a tank of fuel onto the fire. It will also surprise Berlin, since Number 10 has previously ruled out this possibility. In fact, only in February he said:

“In terms of the parties that are going to join that, we have a sister party in Germany, the CDU/CSU. We’re not looking for a new sister party. So I don’t anticipate that situation arising at all.”

With AfD, the Independent Greeks (interesting to see whether the two of them will get along) and ‘Germany-wary’ Law & Justice, the new-look ECR could perceived by some in Berlin as outright anti-Merkel. It’s hard to see how this will help Cameron’s ‘stop Juncker’ campaign.

But is it a deal-breaker for a wider Anglo-German bargain on EU reform? Well, to some to some extent the European Parliament follows its own logic. And by having Tory MEPs vote against AfD joining, Cameron will seek to convey a “I did what I could” approach. Indeed, if the plan is for the ECR to become a vehicle for pushing a reformist agenda, there was always going to be a time when the group was no longer going to be “owned” by David Cameron.

Here’s a second big potential risk though: yes, these parties share a basic scepticism of current EU. However, parties like the Danish People’s Party, Finns Party, Law & Justice are, at best, lukewarm on issues like free trade, reflecting their social democratic core for the first two, and the small ‘c’ conservative base of the last one. Even AfD has come out against the EU-US trade deal – TTIP – as currently proposed. Remember, TTIP is one of the key items in Cameron’s reform package. So, much like the AfD itself, there will be a massive struggle within the ECR over whether it wants to be a solid force for EU reform and free trade or a catch-all sceptical block with a penchant for populism, protectionism and illiberal economics.

You can say that Cameron has no control over his party, or you can say this is an example of a type of devolved democracy (if you’re a federalist, ‘European’ democracy over national politics: this is the system you want) but only time will tell whether this trade-off will be worth it for the wider goal of sweeping reform in Europe.