What happens when four EU leaders get into a rowing boat? 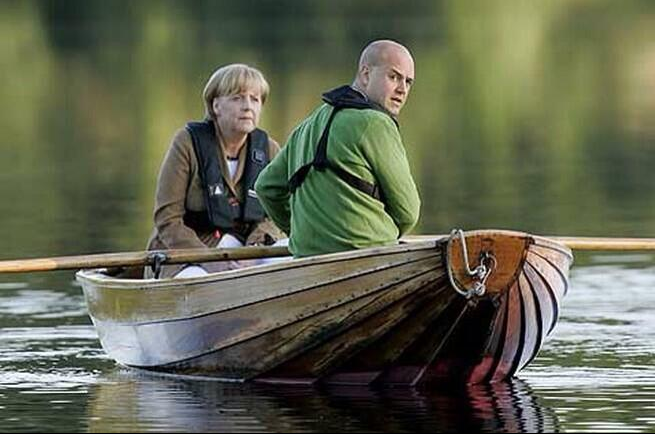 Swedish PM Fredrik Reinfeldt is today hosting David Cameron, Angela Merkel and Dutch PM Mark Rutte, in Harpsund, Sweden – a recreational estate for Swedish PMs throughout the years. The summit apparently features a trip on the “Harpsundsekan” – a worryingly small rowing boat. The tradition involves various world leaders holding on for life and limb in the boat, and was introduced by Tage Erlander, Swedish PM in the 1960s. Nikita Krushchev, Willy Brandt and Kofi Annan have all been in the boat.

Merkel has already had the dubious honour of going on a trip with Reinfeldt in 2008. It should be said that getting four people into any rowing boat is actually a bit of a mission. Given that Rutte is 6’4, Reinfeldt 6’2 and Cameron not a small guy either, this will require some focus.

So what will be discussed?

Well, the summit was decided ages ago and pre-dates the ongoing Juncker row. Initially, the idea was that the leaders of the EU’s most competitive economies were going to meet in order to hammer out the priorities for the next European Commission in particular and the EU in general, with a focus on the jobs and growth agenda.

Reinfeldt has said that there won’t be any “discussions about personalities” at the summit, but no one really believes that. It’ll probably be a mixture of the two. If Cameron can get a better idea of whether Merkel can find a away out of the corner the SPD has pushed her into (a very rare occasion) over Juncker, as well as some reasonably concrete commitments on EU reform, linked to the mandate for the next Commission, he should be happy. 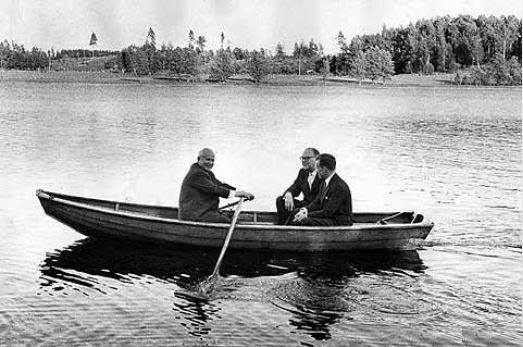 Is it wishful thinking to see this as the “EU reform quad”?  If they could speak with one voice, it would no doubt be a very powerful group which would be hard to ignore. Together with Finland, they are the only EU countries on the World Economic Forum’s list of the top 10 most competitive countries in the world. They also account for 41% of the gross contributions to the EU budget (much more if we count net).

The four leaders formed a formidable alliance in February, achieving the first ever cut to the EU’s long-term budget. Sweden’s Reinfeldt has been very helpful to Cameron on numerous occasions, including shooting down a bunch of proposals for financial regulations. In those EU budget talks, Stockholm deliberately positioned itself further out than London so as not to isolate the Brits. Reinfeldt was also quite helpful after Cameron’s “Bloomberg speech” (in contrast to the Swedish Foreign Minister, Carl Bildt). If Juncker is stopped, it’ll be in no small part due to Reinfeldt’s willingness to stick his head over the parapet, giving Cameron much needed political cover. However, Reinfeldt will probably lose the Swedish elections in September, meaning Cameron will have to negotiate with a centre-left coalition ahead of the potential 2017 referendum.

Likewise, Rutte was key in the EU budget talks and the Dutch have very much emerged as the thought leaders on EU reform, not least when it comes to the role of national parliaments in the EU. In fact, the Hague has been more vocal on many occasions than London itself. Encouragingly, EU reformers in the Netherlands did better than expected in the European elections in May. 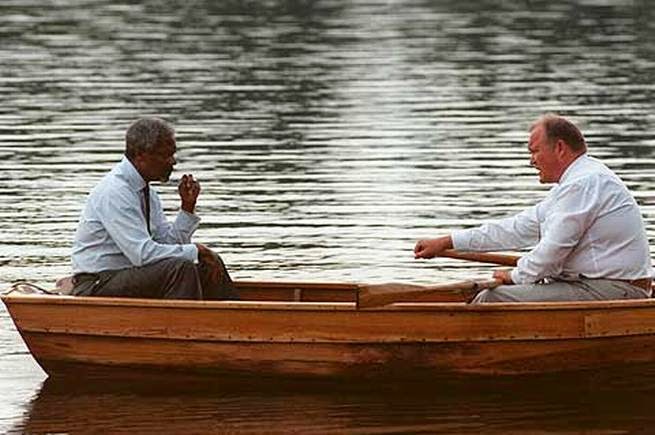 As for Merkel – well, we’ve written endlessly on the need for Germany to row behind EU reform. As the debate over Juncker shows, the country is currently embroiled in a hugely complex debate about how Europe should be governed, and what role Germany should play within it. The Juncker episode was Cameron’s first real encounter with Germany’s grand coalition politics. It won’t be easy.

What’s clear is that if Cameron is to achieve the sweeping change needed for the UK to stay in the EU, these four countries will have to be able to agree a common position.