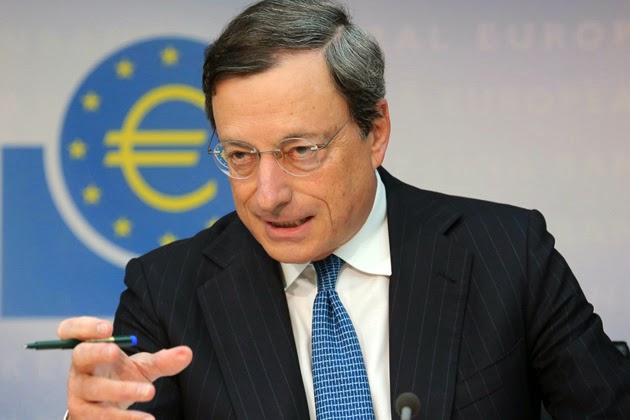 For anyone following twitter yesterday around the ECB’s announcement and press conference it would seem as if we have just had another ‘whatever it takes’ moment (when ECB President Mario Draghi promised to backstop the eurozone).

However, stepping back for a moment and it becomes clear that the ECB acted more or less as expected and some would argue has done the minimum necessary to retain its credibility and not be labelled an ‘all talk’ institution.

Sure, the package of measures looks more impressive when strung together but as we discussed in detail here and here, few if any of them address the crux of the problems in the eurozone which are depressing inflation and growth (delayed impact of internal devaluation, rebalancing of various economies, recapitalisation of banks and the breakdown of the eurozone’s cross border financial system).

All that said, there were a few more subtle and interesting takeaways from Draghi’s press conference.

Unanimous support is impressive but unlikely to apply to further easing
Draghi stressed that the support for this entire package of measures was unanimous. This is quite surprising given the previous Bundesbank opposition and does add weight to the strength of the decision. That said, just because unanimity was agreed here does not mean it can be easily translated into support for much stronger action such as asset purchases. In fact, Draghi’s hesitancy to talk about such a programme in more depth and the ECB’s willingness to push ahead with one suggests a lack of consensus on the issue. Furthermore, the outcry in Germany has already begun and will likely make central bankers think twice about stronger easing action.

Draghi insists the ECB is not “finished”, but its mighty close
Over the past year, Draghi has waxed lyrical about all the tools at his disposal and we have analysed them all in detail – see here. However, with this package of measures he has come close to emptying his toolkit – he admitted as much on the rate side saying that, for all “practical purposes”, the lower bound has been reached.

True, he has pulled out many of the smaller tools and retains the big sledge hammer of asset purchases (Quantitative Easing through buying either private assets or government bonds) but the bar to take such action remains high and gaining support for it remains a huge challenge. Pushing the deposit rate further into negative territory is also unlikely to work as banks will simply begin hoarding hard cash – this of course has some cost in terms of storage and security but it will not be more than a fraction of a percent. Finally Draghi stressed that this package could take some time to have any impact, between three and four quarters (9 – 12 months), suggesting that the ECB is now in wait and see mode as the emphasis falls on governments and the bank stress tests to help push along the economic recovery. 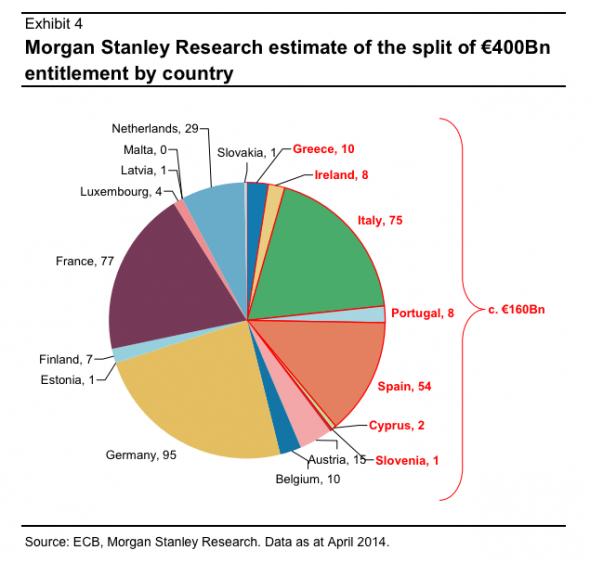 Impact of long term lending operations relies on cross border lending being revived
As the useful chart to the left shows (from Morgan Stanley via FT Alphaville) the amount which banks can borrow is again limited in countries which need it (the periphery) due to their already underdeveloped markets in lending to small and medium sized businesses. The technical structure for the TLTRO (pronounced Tel-tro) does allow for them to borrow more if they lend more but this will take some time. Ultimately, the target seems to be to encourage banks in the core to lend to banks and businesses in the periphery – this fits with the theory of the negative deposit rate which should encourage a search for yield. Rebuilding the cross border system in the eurozone remains a huge task.

Another potential question which arises is whether the end of sterilising purchases made under the Securities Markets Programme (SMP) will raise any legal issues or challenges in Germany and whether it will impact the judgement of OMT sterilisation.

In the end, the ECB has made its play and will likely now give it time to pan out. It will continue to provide dovish statements and may even talk up asset purchases in the future but it will urge patience in waiting to see if these measures have the desired impact.