German media turn on Cameron over Juncker – but what are they arguing for? 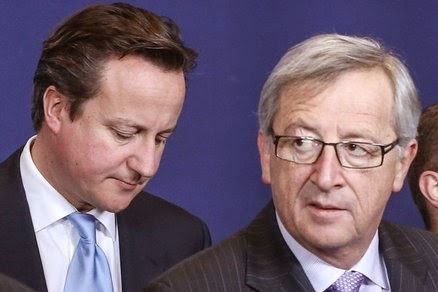 We pointed out on Friday that a powerful coalition between media and politicians was forming in Germany in support of Jean-Claude Juncker becoming the next Commission President and the Spitzenkandidaten experiment more generally. More worryingly for Cameron, he has emerged as the pantomime villain of the piece due to his opposition to both.

What’s interesting though is that German commentators seem to argue more against Cameron than in favour of Juncker – who, we suspect, most of them realise that the idea of Juncker as the saviour of European democracy isn’t entirely intellectually sound. A widely reported pre-election opinion poll for Bild showing that only 7% of Germans actually knew Juncker was a candidate, is no longer cited.  Here is a round-up of some of the key pieces from the past few days:

On Friday, the big news was the endorsement of Juncker by Axel Springer (the parent company of Bild and Welt). In a piece headlined “Juncker has to become President”, the group’s chairman Mathias Döpfner wrote:

“Are the results of the elections in Europe the sovereign decision of the citizens that politicians ought to implement? Or are they a form of non-binding suggestion that in the backrooms of powers can be interpreted and then gladly twisted into something opposite?”

“The issue is clear: Europeans want Juncker as the EU president. Schulz got the second-best result. A third [candidate], who didn’t stand for election, can’t be allowed to get the job. Otherwise that would make a farce out of democracy. You may get away with something like that in the DDR or in far-right banana republics. But not in the EU. Otherwise it will abolish itself.”

In another comment piece on Saturday titled “Merkel must keep her word”, regular Bild columnist Ernst Elitz – who has often been critical of EU over-reach argued that :

“Before the elections it was clear: The Commission President will be decided by the voters and the EU Parliament. Afterwards some national leaders don’t want to hear about it anymore.”

“Whoever listens to the Brits in the debate about the personnel for Europe’s top posts is allowing the notorious spoil sport to take charge of the game… “It is impudence that the British Prime Minster David Cameron called the vote of the people an ‘unnecessary restriction’ for the political manoeuvring in the personnel poker. What kind of democracy understanding is that!”

Die Welt‘s Brussels correspondent Florian Eder – another German journalist and commentator who is often sensitive to the need for EU reform – also had a piece on Monday in which he argued that:

“It would in any case be a risky move [for member states to put forward an alternative candidate] which would delight the strengthened anti-Europeans that David Cameron and Francois Hollande want to keep at bay. The sceptics could already by the first vote get that which they could never achieve alone: a hamstrung, institutionally paralysed EU. Is that supposed to make sense?”

“the European Council is by no means set against Juncker. Many of its members, including social democrats, have come out in support of the Luxembourger. That was how it had been agreed: the election winner would become Commission President. Cameron is voting against this as he blames his defeat at the European elections on the EU, which should show consideration towards him and his party interests… whoever blocks Juncker is duping the voters who believed in a political promise.”

German magazine Spiegel went the furthest, with its English-language version publishing an editorial yesterday entitled “Decision Time: Britain must now decide if it will stay in Europe”, which argued that:

“The EU cannot allow itself to be blackmailed by the British for another three years and refuse to give the people of Europe what was assured to them before the election – that they could use their vote to determine the next president of the European Commission. If the EU doesn’t fulfill that promise, it will lose all credibility and acceptance… Britain is important to be sure. But the choice between a more democratic EU and Britain’s continued membership is clear. Europe must choose democracy.”

There are a others who take a more nuanced tone. For example FAZ’s Brussels correspondent, Werner Mussler, points out that:

“The future of democracy in the EU does not depend on whether [the European Commission President] is called Jean-Claude Juncker, Martin Schulz or something else.”