ECB to ease policy but impact could be limited

Over on his Forbes blog Open Europe’s Raoul Ruparel provides a preview for tomorrow’s ECB meeting at which some action to ease monetary policy is expected.

In specific terms he sees the ECB taking the following action:

It could also decide to end the sterilisation of the Securities Market Programme purchases, creating a liquidity injection of €164.5bn and loosen collateral rules further. The ECB will likely keep asset purchases (both of private assets and government debt) in reserve but will likely reiterate that such action remains possible as part of a broader dovish statement from Draghi.

Despite some of these moves being unprecedented Raoul forecasts that the impact could be limited. This is for three reasons. First, much of it has been priced in as the moves have long been expected. Second, the impacts of a negative deposit rate and targeted LTRO are far from certain. Finally because it does not address the key problem, as he notes:

As the chart below shows (courtesy of SocGen) the biggest problem facing the eurozone financial system at the moment remains the discrepancy in lending rates to businesses in different economies. The knock-on impact of this is limiting credit in countries where the economy needs it and where it is needed to help drive inflation and growth. 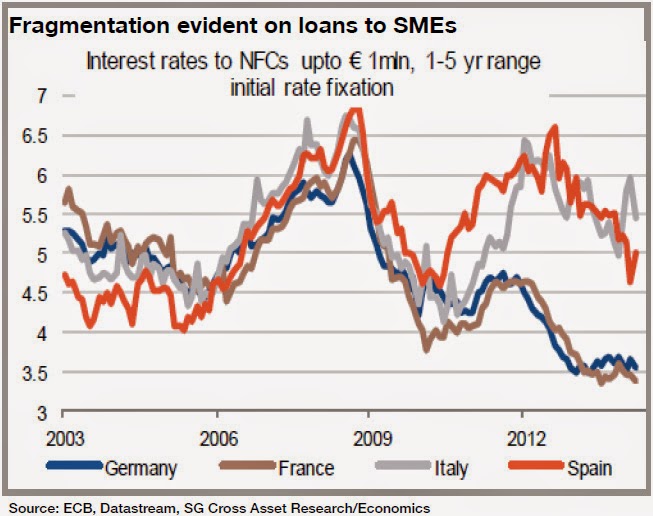 It’s not clear that the rate cut, negative deposit rate or the LTRO will help close this gap. Fundamentally this gap is driven by a few factors which these issues do not address: