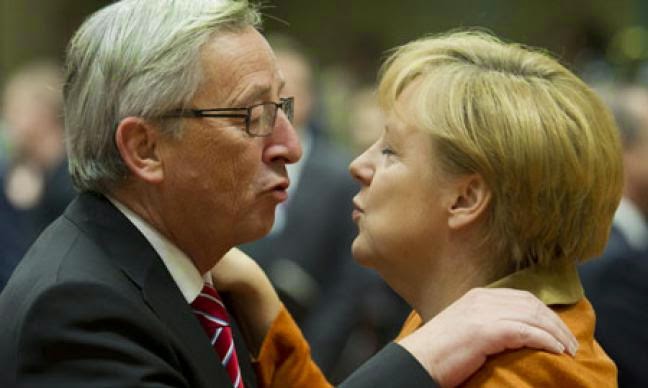 As we have noted before, for all the talk over the next Commission President, it remains anyone’s game and there are a number of candidates in the running.

Everyone’s now watching the mixed and vague position of German Chancellor Angela Merkel. To our mind, here is how her position has evolved:

This has now moved a step further on with Merkel saying the following in a speech in Berlin:

“I can only repeat what I already said: I am working in all talks I’m leading so that Jean Claude Juncker gets the necessary majority in the [European] Council in order to be able to become the next Commission President.”

“In addition I am working for such a decision even when taken controversially – you know the necessary majority; it is a qualified majority – to take place in a European spirit. ‘European spirit’ means that one always has to work on achieving the highest level of agreement.”

To date this is probably the strongest backing she has given Juncker and importantly it implies she is actively working for a majority in the European Council to support him and would take a ‘controversial’ decision. As is her nature, she adds a crucial qualification: she prefers a consensus.

As we pointed out in our previous post, Prime Minister David Cameron will need to get one more large country on side if he is to block Juncker. Germany is looking less and less likely, not least because Merkel would actively annoy her coalition partners and much of the media if she ends up blocking Juncker.

Her speech continues to include nods to Cameron and shows signs she still wants to keep him close and involved in the discussions. Did Merkel intend for this to happen or is this the point when one of her trademark broader strategies – in the this case qualified support for Juncker before dropping him as part of a wider deal – has finally backfired.

This is genuinely an open question – we suspect that anyone claiming to know the answer to that question at this juncture is a bit economical with the truth.