The European Commission has just released its latest round of country-specific recommendations (the Commission’s advice on how the country can boost economic growth and maintain stable public finances). 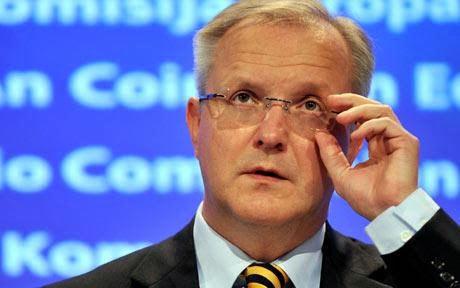 As with the broader economic state of the eurozone, the recommendations are a bit of a mixed bag. There are some positive assessments of the peripheral countries, but also warning over continuing problems with high debt levels and high unemployment.

We would argue that there is also still too much complacency on the former and not enough urgency on the latter points. Below, we’ve picked out some of the more interesting points for the big four countries.

FRANCE
The European Commission’s assessment of the French economy is quite damning, given the context of a supposed economic recovery. The Commission says that the “level of detail of the fiscal consolidation measures is insufficient” to ensure France meets its targets and that the economic forecasts used for 2015 are “slightly optimistic” and the planned savings are “very ambitious”.

The Commission also takes aim at areas of the economy which the Socialist government will not be too pleased with, specifically arguing that “sizeable short-term savings cannot be achieved without” curbing health and pension costs through reforms of both sectors. The report also hits out at French labour costs, warning that they reduce “firms’ profitability”, and its ranking in surveys of business environment which has “deteriorated” not least due to regulation which hampers growth of small business in France, the significant number of protected professions and the high overall tax burden.

Therefore, the European Commission calls for action on all these areas. Ultimately, the report does a decent job of highlighting the on-going flaws in the French economy and the lack of strategy displayed by the French government. While it has taken tentative steps towards reform in some areas others fly under the radar while the government does not yet seem to have fully bought into the reforms it has laid out for the coming years.

GERMANY
The recommendations for Germany feel very familiar with early comments regarding its current account surplus. Specifically the report calls on Germany to:

However, there is not an extensive discussion and the report focuses on other areas which include some interesting recommendations such as “more ambitious measures to further stimulate competition in the services sector” (something we have long advocated) and “more efficient public investment in infrastructure, education and research”.

ITALY
The European Commission seems to have doubts over Italy’s latest budget forecasts labelling them “slightly optimistic.” “The achievement of the budgetary targets is not fully supported by sufficiently detailed measures, in particular as of 2015”, the Commission continues. This will certainly revive the domestic debate between Italian Prime Minister Matteo Renzi and his critics, who argue that there is not enough money to cover for the tax cuts for workers and businesses recently announced by the Italian government.

On labour market reform it notes, “Globally, the Italian labour market continues to be marked by segmentation and low participation…Therefore, the limited steps taken so far need to be extended.” Here, the recommendation is to “assess the need for additional action” by the end of the year. Another long-running issue in Italy is services liberalisation. According to the Commission, “There are still a number of bottlenecks to competition (reserved areas of activity, concession/authorisation schemes, etc.) in professional services, insurance, fuel distribution, retail and postal services” – and these need to be removed.

Interestingly, the European Commission also notes that “one of the key levers to improve the implementation performance [of Italy]…lies in enhanced coordination and a more efficient allocation of competences among the various levels of government”. This reform is already on Renzi’s radar. Still, we’re not sure how well this specific ‘suggestion’ will go down in Italy, given that it touches on a politically sensitive issue – the distribution of powers between the central government and the regions, which is laid out in the Italian constitution

SPAIN
The European Commission finds Spain’s budgetary forecasts “broadly plausible for 2014 and subject to downside risks in 2015”. However, “for 2016-2017, the GDP growth rate in the [Spanish government’s] programme seem somewhat optimistic.” Similar to Italy, the European Commission’s recommendation to Spain is to “reinforce the budgetary strategy as of 2014, in particular by fully specifying the underlying measures for the year 2015 and beyond.”

Although the European Commission acknowledges that Spain’s labour market reforms have gone some way in ensuring greater flexibility, limiting job losses and reducing the number of dismissals challenged in court, “Segmentation remains an important challenge for the Spanish labour market, the number of contract types remain high and the gap between severance costs for fixed-term and indefinite contracts remains among the highest in the EU even after the reform.” Furthermore, “the inadequate labour-market relevance of education and training and the high proportion of unemployed without formal qualifications contribute to the high youth unemployment rate, as well as to long term unemployment.” Therefore, the European Commission recommends that the Spanish government “enhance the effectiveness and targeting of active labour market policies, including hiring subsidies” and “reinforce the coordination between labour market and education and training policies.”

Some variance from country to county but a couple of clear themes can be found here. Much more work needs to be done on labour market reform and improving the business climate. On top of this the forecasts continue to be optimistic. Plenty of work to be done on many fronts then.