Schäuble comes out strong for #EUReform 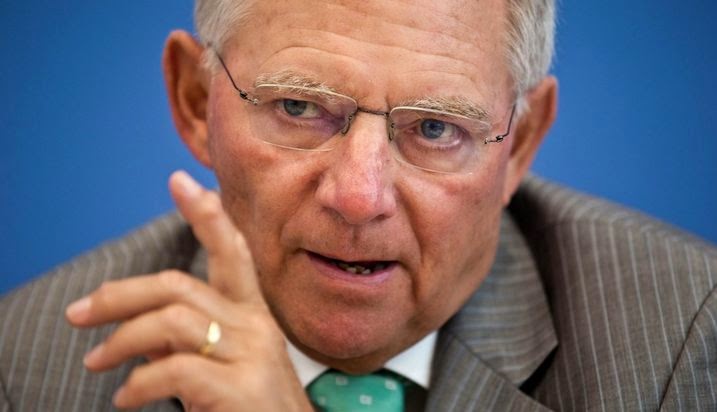 The latest intervention by one of Europe’s most important politicians shows that, in the wake of the shock European elections result over the weekend, Europe’s leaders are waking up to smell the coffee.

What are the lessons of the European elections? Surely not a mindless pursuit of ‘More Europe’. We need a more intelligent union.

The question ‘More or less Europe’ – as one alternative or the other- has been posed falsely. On one hand we need a stronger Europe, particularly for the big and overarching questions, that no [one] state can solve alone. And, on the other, we also need a greater willingness to consistently apply the subsidiarity principle.

Setting out what he thinks Europe should be for, Schäuble says:

An intelligently integrated Europe, can in the end, even mean ‘less Europe’ – if after a critical appraisal, tasks and responsibilities are unbundled and clearly assigned. The EU could concentrate its tasks to the Single Market; trade; financial markets and currency; climate; environment and energy; as well as foreign- and security- policy. In the areas, therefore, where long-term success can only be negotiated on the European level.

He again laid out his view on treaty change, arguing that in order to strengthen the eurozone, it is “unavoidable in the medium term.”

However, on the EU’s ‘democratic deficit’, it is less clear exactly what Schäuble has in mind. He argues that:

A cleverly integrated Europe would then, look something like a “multi-level democracy” – a complementary, interlocking system of democracies with a different range and scope of competences: a National-European double democracy. Then the citizens of our national democracies and European democracy would be level.

Fine, but it is the exact balance between the two that is so politically controversial – and it remains unclear how German policymakers intend to square the inbuilt tension between national democracy and European integration, particularly in the eurozone where this tension is greatest.