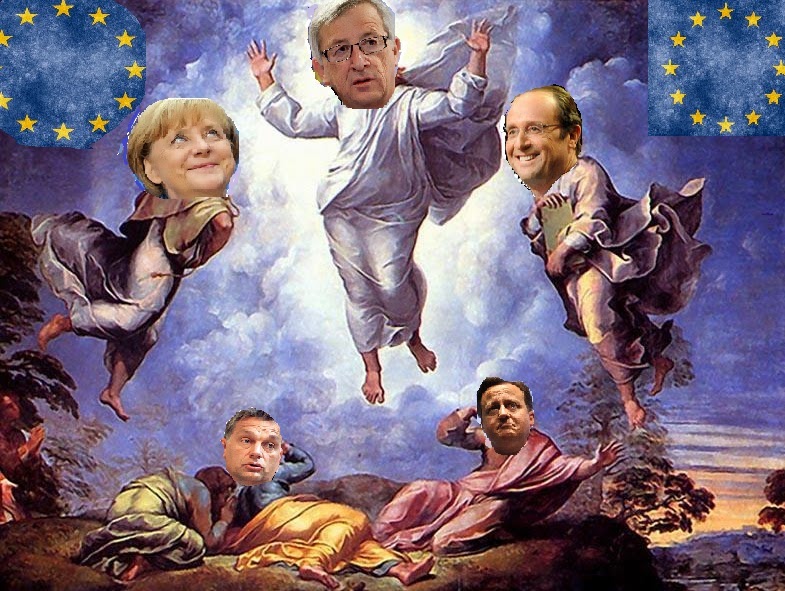 Since Tuesday’s European Council, at which Angela Merkel pointedly played down Jean-Claude Juncker’s prospects of becoming the next European Commission President, she has come under a phenomenal amount of pressure domestically from a wide ranging coalition spanning senior members of her own party, her coalition partner the SPD, the opposition Green party, Germany’s most popular tabloid Bild Zeitung and Jürgen Habermas.

This pressure was most likely responsible for her change of tone earlier this afternoon when she said that:

“I am conducting all the discussions in the spirit that Jean-Claude Juncker should be the President of the European Commission.”

Even if this is not tantamount to saying “Juncker will be the next Commission President”, it is still a clear departure from her position on Tuesday when she said that:

“The agenda [of the next European Commission] can be handled by [Juncker], but also by many others…At the end, there will be a fairly broad tableau of names on the table.”

The SPD has been quick to respond, with the party’s General Secretary Yasmin Fahimi claiming that:

“It is good that the public pressure on Merkel forced her to correct her stance. Anything else would have been cheating the voters.”

So is it a done deal? No – a lot can still happen before the next Commission President is announced; despite the lofty talk about ‘EU democracy’, Juncker’s eventual ascension or otherwise will still come down to cynical horse-trading between member states – if there is a wider national advantage (such as securing a key Commission portfolio) to be had by supporting an alternative candidate, some member states may jump at the chance.
However, it cannot be denied that Juncker’s prospects look healthier than they did this morning, leaving Cameron in a vulnerable position. We do not know exactly how many other member states share his reservations about Juncker but the risk is that some could now peel away, thereby massively reducing the chances of forming a blocking minority.
The question for the UK is now whether to accept the damage that a Juncker led Commission would entail and seek other policy and personnel concessions or to invest significant political capital in blocking his accession. Given how big this issue has become both in of itself but also as a proxy for the battle of visions in Europe, Cameron must get something very substantial.

Anything short of the single market portfolio for the next UK Commissioner probably wouldn’t cut it.