"Something is rotten in Europe" – European elections reaction round-up 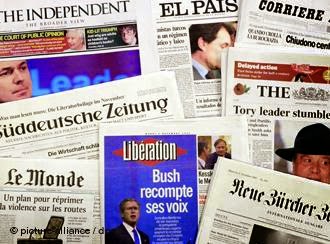 As the dust settles following the European elections, we are now beginning to see some interesting analysis and commentary from across the EU. Here is our round-up.

Despite the relative success of the established parties in Germany, many commentators have picked up on the EU-wide picture with FAZ‘s economics editor Holger Steltzner writing that the rise of anti-EU and protest parties across Europe should serve as a “dramatic warning” and that

“The EU can no any longer be a one-way street, but should give back [powers] to the member states or local authorities.”

“Something is rotten in Europe. And the reaction of politicians from the large European party-blocs makes it clear where the problem lies. ‘Given the strength of the populists we have to work even closer together’ is what you hear from both sides. This means: the establishment is locking ranks and closing its ears.”

In Bild, Jan Schäfer argues that:

“In the future, extremists from both sides will grip Europe like a set of pliers! The result: more nationalism, more little-statism and less free trade. That is bad for exports, for jobs. It is the opposite of what Europe needs right now.”

“The 2014 [European Parliament] elections will be remembered as the historic defeat of a political system. The eclipse of traditional parties. The rejection of the European establishment… The European vote confirms a trend that extends itself well beyond the continent: the sign of our times is the revolt against the elites, the institutions, the traditional forms of representation. And Europe is perceived as the bedrock and the guarantor of those elites people are rebelling against.”

In France, Nicolas Barré argues in Los Echos that:

“With regard to Europe, the message from voters and those who abstained is rather a great distress towards political projects that seem empty to them – as [these projects] offer a choice between going backwards, which is always something difficult to enthuse about, and moving forward, but without knowing very well to where. Since the status quo is not an option either, for being so unsatisfactory, one can understand that a large number of voters have stayed away from ballot boxes or have voted ‘against’.”

Dutch daily De Volkskrant features a comment piece by Alexis Brezet, the opinion pages editor of French daily Le Figaro in which he argues that:

“the European idea, as developed since the Treaty of Maastricht, is the main victim of the elections. If you add the non-voters to the voters who have supported a europhobic or eurosceptic party, it’s only one third of EU citizens which supports the European project. Apparently Europe, which is being shaped without the people and sometimes against the people, doesn’t appeal any longer…If Europe wants to win back the hearts of Europeans, simple reparations won’t suffice: a fundamental reform is needed.”

A leader in Belgian daily De Tijd argues that:

“the eurosceptics will in-avoidably weigh on decision making in their own countries and in Europe… Cameron will now refuse to make any concessions to Brussels… discussions about British EU membership and its modalities will become very difficult. France is an even bigger problem. The core eurozone country has struggled for a long time already, economically… Now that a quarter of the French have voted for Marine Le Pen… it will become even more difficult for Hollande to implement necessary reforms and savings.”

In Poland meanwhile, most commentators are focusing on the national implications of the vote – where Civic Platform beat Law and Justice by a very narrow margin – and have not really commented on the broader European picture.

No doubt much more will be written about these elections in the coming days and weeks, but it’s clear that many already consider them to be a potential watershed moment for the ‘European project’.