Heads begin to roll in aftermath of European election shock 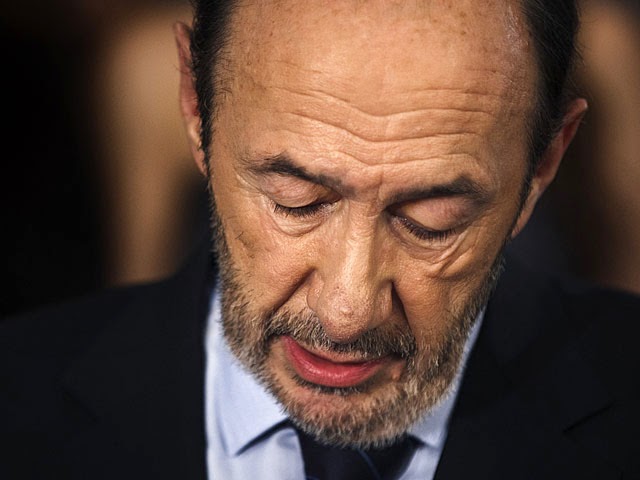 As might be expected after some shocking showings in the European Parliament (EP) elections, the heads have begun to roll – and rightly so, some would say.

The most high profile resignation so far is that of the Spanish opposition Socialist leader Alfredo Pérez Rubalcaba (pictured) who stepped down yesterday after his party’s vote share dropped to 23% from 39% in the previous EP election. His decision is not exactly a surprise as many have been scratching their heads over the opposition’s lack of penetration despite numerous opportunities including (but not limited to) the Spanish economic malaise, austerity and Partido Popular’s top level corruption scandal. Where the party goes from here remains to be seen but with the rise of regional (particularly Catalan) parties and the new Podemos movement (see our profile here) the party needs to reassert itself as the primary opposition.

Similarly, a poor showing by the Romanian opposition party saw its leader Crin Antonescu resign along with all the party’s executive bureau. Interestingly, the party has also voted to switch from the liberal ALDE grouping in the EP to the centre-right EPP.

Meanwhile, in Ireland, Labour leader Eamon Gilmore jumped before he was pushed after his party secured barely 7% of the vote – likely paying the price for being the junior coalition partner during a difficult period of government (similar to Lib Dems in the UK or PASOK in Greece). This paves the way for a cabinet reshuffle, but again his replacement is also still unclear.

Other scalps include Igor Lukšič, President of the Slovenian Social Democrats, who has bitten the bullet and stepped down, as well as the leader of the Hungarian Socialists, Tibor Szanyi, who offered his resignation (subsequently accepted) after his party was comfortably beaten by the neo-fascist Jobbik.

There could still be more to follow as the dust settles. But more importantly than those who have lost their heads is for those that just clung on to theirs to get the message and begin pushing for some serious reform across Europe and offering a clear alternative to those who still do not.