What does Wilders’ defeat in Dutch euro elections mean? 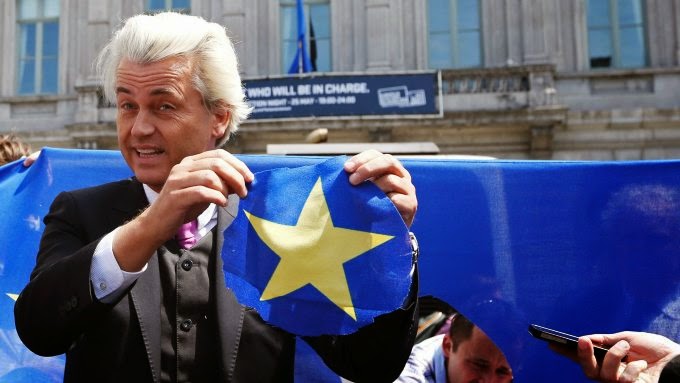 For various reasons that we don’t quite understand, most of the UK press has deemed it illegal to report on the exit polls from yesterday’s European elections in the Netherlands – with the exception of the Telegraph and the Guardian. The Netherlands is the only country to conduct exit polls ahead of Sunday night (10pm GMT roughly) when the results from all 28 EU countries are announced.

Geert Wilders’ Freedom Party (PVV) took a clear a beating. If the exit polls stand, the party will have dropped from 17% in 2009 to 12.2% this time around, translating into a loss of 1 seat (the PVV had 5 seats in the last parliament but one MEP defected). This is no doubt an unexpectedly bad result for Wilders.

Wilders’ defeat has given rise to a hilarious conspiracy theory in Brussels that the UK media isn’t reporting on the Dutch elections since the result doesn’t conform to its alleged anti-EU bias. Apart from the fact that the BBC and others genuinely worry about breaking the law (even though it’s a ridiculous law) this is also a wrong reading of the results.

Wilders screwed up. His controversial comments about Moroccan immigrants caused him real damage. Three of his four sitting MEPs even refused to campaign as a result. But to see this as a victory for the EU status quo in the Netherlands is pretty heroic.

– The strongly Eurosceptic Socialist party gained an extra 3% of the vote, translating into 1 extra seat, which sees it overtake the established centre-left PvdA. Together with the PVV, these strongly EU-critical parties are set to win 22.2% of the vote.

– While it’s difficult to know what to read into this result, the parties that we’ve dubbed “critical reformers” have done relatively well. Prime Minister Mark Rutte’s VVD party maintained a respectable share at 12.3%, despite leading an unpopular government, while the Christian Union/SGP increased its share by a percentage point.

– The two biggest victors are the D66 liberals and the CDA, which are vying for first place on just over 15% of the vote. These parties are clearly pro-EU – and D66 is doing a lot of good work in the EP – however, please do resist the temptation to see this as an endorsement for more EU integration. Firstly, the D66, the great winner of this election, called on a freeze for transfer of powers just before the election, prompting Foreign Minister Frans Timmermans to post on his facebook page “D66 is suddenly also ‘very euro critical'”. Meanwhile, the CDA vote of 15% is down nearly 5% on its 2009 vote. It would be just as plausible to see the D66 and CDA vote as anti-incumbent vote against the PvdA-VVD coalition government.

– Lastly, turnout in the Netherlands remained stable, but at an incredibly low 37%. With Europe so much more in the headlines over the last few years and the Lisbon Treaty giving MEPs more powers, why in the world hasn’t turnout gone up dramatically if it’s true that more EP powers and greater awareness will lead to greater voter engagement?

These results certainly present a mixed picture. Wilders’ failure to translate his polling into votes is notable but whether this pattern will be repeated elsewhere (in France, for example) remains to be seen – and probably has much to do how badly his campaign went.