We’ve already blogged about the Dutch #EP2014 exit poll but we thought we’d also break down the projected result according to the classifications we used in our recent briefing which forecast the composition of the new parliament. Rather than using the arbitrary and artificial EP political groups (which tell you little about what the parties actually believe), we classified the parties in three blocs – status quo/more integration, critical reformers, and the malcontents’ block (see here for a detailed explanation of these classifications).

Here is how the projected Dutch result looks: 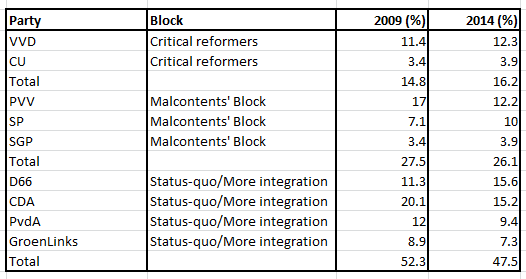 While we predicted that overall, there is a risk that the malcontents’ bloc and the status quo/more integration parties could crowd out the critical reformers, the Netherlands could slightly buck this trend with the critical reformist parties – Dutch PM Mark Rutte’s VVD party and the ChristianUnion – increasing their vote share.
This is encouraging although sadly it looks unlikely to be replicated across the EU given that Dutch politics is particularly fertile for reform minded parties.