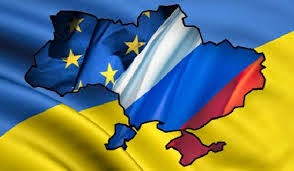 As we laid out in our Divided We Stand briefing, agreement among the EU 28 on how to respond to Russia’s role in the Ukraine crisis is not easy to come by. And if the doorstep remarks of EU Foreign Ministers arriving in Brussels this morning is anything to go by — that trend won’t be changing any time soon.

“I hope…we will continue and intensify our preparations for a third tier of sanctions, and other additional sanctions if the circumstances require it.”

He was echoed by Lithuania’s Foreign Minister, Linas Antanas Linkevičius, who said that Stage Three sanctions were necessary to send a ‘clear signal’ to Moscow, adding that unrest in Eastern Ukraine was due to “Russian-sponsored insurgency.”

Meanwhile, Austrian Foreign Minister, Sebastian Kurz, took completely the opposite line arguing that the red line for Stage Three of sanctions had not been reached.

On where the red line would be to step up the EU’s response, Kurz argued:

“[The EU agreed that] the third step of sanctions would be unleashed if Russian troops moved into Ukraine…economic sanctions would not just hurt Russia, but they would definitely hurt us too…If we went a stage further on sanctions with every provocation, then we would already be at war.”

Luxembourg Foreign Minister Jean Asselborn found himself somewhere between the two, although he remained very cautious on sanctions:

“The referendum has no legal basis so we can’t burn too much energy on this… President Putin clearly spoke out last week that the referenda should be delayed…So we will see. I think Russia is starting to think about what the big problems will be… I think Russia will return from the brink. We will not have the sanctions as the main point today.”

Once again then, as Russia essentially endorses the result in the self-rule referendum in Eastern Ukraine, the EU struggles to find a clear line on how, if at all, to respond to recent events.