Meet the man who wants to blow up the European parliament 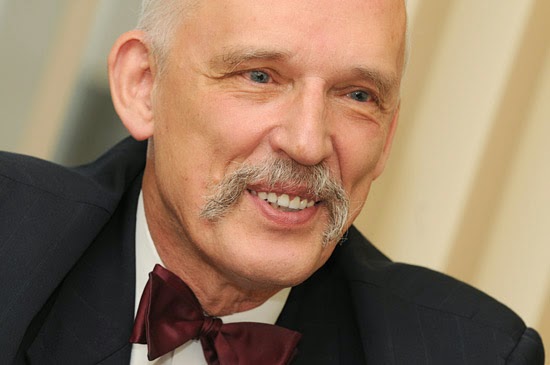 In our recent briefing ahead of the European elections, we estimated that anti-EU, protest and anti-establishment parties of various forms are set to increase their share of the vote and their number of seats in the European parliament.

One such party building up some impressive momentum as polling day approaches is the Polish Congress of the New Right, led by the mega-eccentric, bow-tie aficionado 71-year old Janusz Korwin-Mikke. A few weeks ago the party was polling at 2/3% but in recent polls the party has consistently been at or above the 5% minimum threshold, a result which would give it 3 MEPs.

The party is an odd mix of extreme libertarians and nationalists and Korwin-Mikke himself has been around Polish politics since the fall of Communism without much success. Unlike most parties in Poland, the New Right is strongly anti-EU with Korwin-Mikke describing the Commission as “bastards and Communists”, and saying that:

“We are going to the European Parliament to show what a nonsensical institution it is. It’s not possible to achieve anything sensible there”.

In a speech a couple of weeks ago Korwin-Mikke said that the party would go into the parliament in order to detonate a bomb inside it, while one of his MEP candidates claimed that “the European Parliament is a brothel, a role for which it is ideally suited”. On the surface, the party bears many similarities to UKIP and the party may want to join UKIP’s EFD group in the EP. However, such an alliance is unlikely given that Korwin-Mikke’s views make former UKIP MEP Godfrey Bloom appear like Polly Toynbee. For example, his long-standing view is that women should not have the right to vote as they do not “understand politics” and tend to vote for pro-welfare parties.
However, even the party does make it into the European parliament – Polish polls have proved notoriously unreliable in the past – it will not have any wider implications for Poland’s membership of the EU where support is among the highest in the whole EU. It could make plenary sessions in Brussels and Strasbourg more interesting though….
Author : Open Europe blog team
Print