Is the eurozone crisis over? The Germans think not…

There was an interesting poll in today’s FAZ conducted by INSA for Bild on whether Germans believe that eurozone crisis is over or not.

The results were pretty comprehensive with 81% saying that they do not believe the crisis is over compared to 7% who do.

Furthermore, 34% of Germans believe that Greece is on the road to recovery compared with 39% who believe the country has not done enough to reform its economy. Clearly they remain very unconvinced by the efforts of the Greeks.

In the same vein, Eurostat this morning put out its first estimate of the debt and deficit figures for the end of 2013. As might be expected they don’t make particularly pretty reading. As the graph below highlights, the debt levels in many EU countries have continued to increase and by substantial amounts in Cyprus, Greece and Slovenia – all due to bank bailouts/recapitalisations. 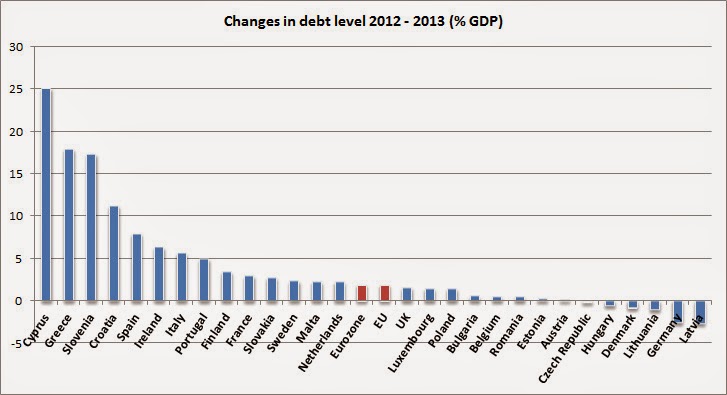 With debt levels continuing to rise and the long term structure of the eurozone still developing it remains premature to cast the crisis as over – at least the Germans seem to think so.