In a new flash analysis out today, we look at where each EU member state stands on expanding sanctions against Russia.

There is a huge diversity of views within the EU on what to do next with regards to Ukraine and Russia. This is mostly down to divergent interests (economic, political and cultural) for different member states, as well as varying views on the effectiveness and implications of further sanctions. Countries range from Poland and the Baltics, which have very strong economic links with Russia but remain very hawkish, likely due to historical experience, to countries such as Bulgaria and some Mediterranean countries which remain quite dovish. Open Europe has attempted to quantify this on a Dove/Hawk scale from -5 to +5. The average ranking for EU members is 0.4 suggesting that the bloc as a whole remains someway off from finding the unanimity needed to push further sanctions.

In terms of trade links to Russia, Lithuania has the largest trade turnover at almost 32% of its GDP, while the Netherlands, Slovakia and Estonia also have high levels at 11%, 11% and 14% of GDP respectively. There is however, no strong link between deeper trading links and a more dovish approach to sanctions on Russia, suggesting the discussions are informed by a number of complex factors.

The key graph is below (click to enlarge).  Clearly there is a huge level of divergence, based off a number of factors (not just total trade turnover, which is shown on the vertical axis). 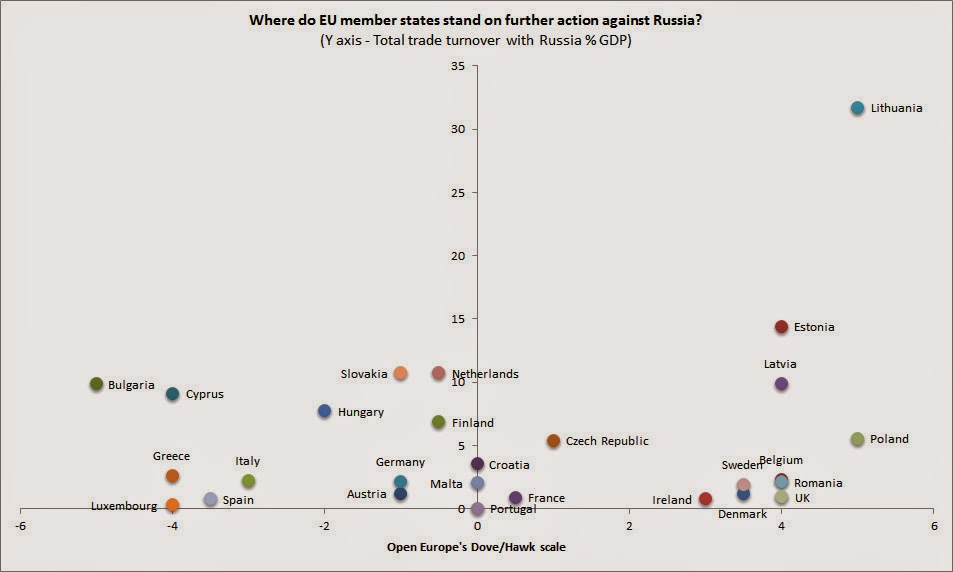 Despite all this, further sanctions remain on the table. In the analysis we examine what form further sanctions could take. It would likely be sanctions on: specific firms, sectors or broader financial sanctions. The fallout of all of these has the potential to be serious, possibly explaining some of the divergence across the EU.

Attention now turns to tomorrow’s meeting between the West and Russia. The focus remains on a ‘diplomatic solution’ but with Russia warning of civil war (not least because it fits its narrative of instability), and calling for the UN to condemn Ukraine’s actions to remove pro-Russian forces in Eastern Ukraine, this remains very uncertain.