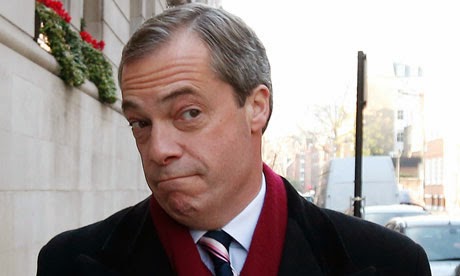 The Times today uses the news that Nigel Farage is to be investigated by the EU’s anti-fraud office OLAF, following a complaint from an ex-Ukip official that £60,000 of EU allowances paid into his personal bank account have gone “missing”, to attack the “fraudulent prospectus” that he is “the politician who is not a politician”.

The chief allegation is that:

“The Ukip leader has received £15,500 a year from the EU since at least 2009 to pay for the upkeep of his constituency office, a small converted grain store near Bognor Regis, according to transparency reports filed on the party’s website.

However, the grain store was given rent-free to Mr Farage by Ukip supporters 15 years ago. Utilities and other non-rental costs amount to no more than £3,000 a year, according to the former office manager, leaving about £12,000 a year unexplained.”

The paper also notes that Mr Farage “also revealed that he used a proportion of his [General Expenditure Allowance] to pay more than £1,000 a month towards a controversial second EU pension scheme of which he was a member between 1999 and 2009.”

We looked at this additional pension scheme back in 2009, when it closed to new members, and it was controversial for two reasons. Firstly, it was two-thirds funded by taxpayers and, second, the system relied on MEPs being honest enough to fund the shortfall in their allowances out of their own salary. Credit to Farage for leaving the scheme – but being part of it in the first place doesn’t reflect well on him (though he’s one of many, many MEPs from all parties who were or still are).

Whatever the rights or wrongs of Farage’s actions, this illustrates that the EP’s allowances and expenses system is still miles away from what taxpayers should accept. The General Expenditure Allowance is notoriously vulnerable to abuse because it is generous, has a wide list of potential uses and does not require MEPs to produce receipts. The Times’ leader itself admits that “It is probable, even if these allegations prove to be true, that Mr Farage has done nothing illegal”.

Predictably Farage’s response casts him as the victim of a “politically motivated attack from what is the establishment newspaper.” The general expenditure allowance, he said, “is given to every MEP and we can spend it how we want to,” adding:

It is right that Nigel Farage is subject to proper scrutiny and that investigations are carried out if he has a case to answer, but there’s still no proof he has done anything illegal. And whether singling out Farage will actually help or hurt his cause remains to be seen. However, what’s clear is that the EP’s allowance system must urgently be reformed.

The EP allowances system is something that we’ll most definitely return to.