Can the real Super Mario please stand up? 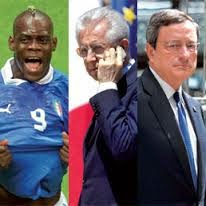 Former Italian Prime Minister Mario Monti may be out of Italian politics, but it’s fair to say he still likes to talk – especially when travelling abroad.

In an interview with Belgian daily De Morgen and Dutch daily De Volkskrant, Monti seems to hint at what many Bundesbank-fearing Germans already suspected: that the ECB’s pledge to do “whatever it takes” (i.e. the OMT, the new bond-buying scheme) was de facto grounded in a political decision – contrary to what the ECB’s mandate dictates.

Here is what Monti said in the interview:

[At the June 2012 European Council], I have used my full negotiating position in order to get a line approved that looks boring at first glance. At 4 am, the signatures of all leaders had been provided, including the ones of [German Chancellor Angela] Merkel, of my good friend the Dutch Prime Minister Mark Rutte, and of Finnish Prime Minister Jyrki Katainen, you can say the monetary firepower from the North […] The line established, in short, that eurozone countries who did their homework, like Italy, were guaranteed ECB support. That statement – at the highest political level – didn’t impress the markets, because the leaders did have the authority, but no money. One month later, ECB President Mario Draghi came out with his famous statement: the ECB is ready to do whatever it takes to preserve the euro. And believe me, it will be enough. That did calm the markets, because Draghi did have the money.

Monti is clearly trying to claim some credit – and the headline of the interview in De Volkskrant is actually “Mario Monti: the man who saved Europe”. However, if Monti is right, it clearly means that the ECB’s political independence was seriously compromised, since, strictly speaking, there should be no link whatsoever between a political agreement and ECB action..

Draghi’s statement is one of the main reasons behind the fall in borrowing costs for countries in the eurozone periphery – some of which have yet to deliver on real economic reform. Monti may have given Draghi some of the credit – but he has also given fuel to those Germans who fear the ECB’s independence is a thing of the past.