Greece exits the wilderness and returns to the markets

It has been labelled by some as the “amazing comeback”. Greece has this morning sold €3 billion of five-year bonds at an interest rate of 4.95% – and the demand exceeded €20 billion.

To be fair, the turnaround in investor sentiment with regards to Greek debt is pretty astonishing and the demand for the first Greek bond issue has outstripped even the most optimistic forecasts. As the newswires pointed out this morning, it increased quite significantly overnight:

But this outcome has left a few people scratching their heads and wondering what this means for Greece and the eurozone – both of which continue to struggle when judged on a broader set of data indicators. Below, we try to address some of these questions in a reader-friendly Q&A.

Why has demand been so strong?

There are a couple of reasons for this, and they have little to do with Greece.

But isn’t there a huge amount of risk involved?

Actually, given the structure of the deal and the environment involved, maybe not as much as one would expect (click on the graph to enlarge).

This has almost come out of nowhere in the past week or two: why such a rush?

But how much of a turnaround does this really signify for Greece?

While it’s certainly a positive, the macro level data for Greece remains worrying. As the charts below show (courtesy of Natixis), unemployment remains very high. In particular, youth and long-term unemployment are both stubbornly high, and threaten to become a drag on the economy in the longer term. While business activity has stopped its decline, the hope of a swift recovery is yet to be based on clear evidence. There is a long way to go in the structural reform programme, as highlighted by the 329 reforms recommended by the OECD.

More broadly, Greece’s long term strategy for competing and growing in the eurozone remains unclear, and it has zero room to absorb further economic shocks. Citi – forever bearish on Greece – took it upon themselves to be the buzzkill amongst all this optimisim with the chart below (via FT Alphaville). Ultimately, it remains a small symbolic step, especially given the size of the bond issue. 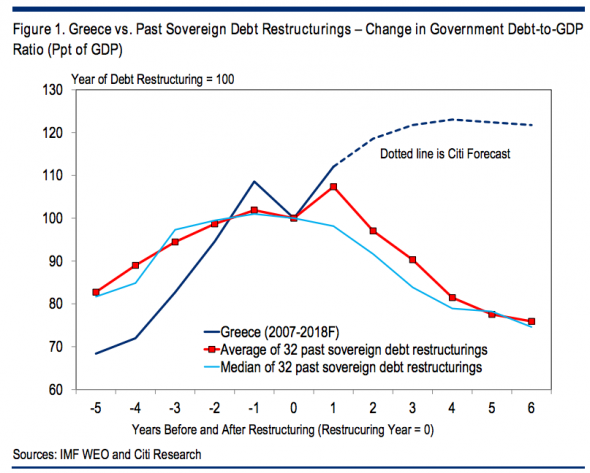 Will Greece get to spend this money as it wishes?

That seems hopeful at best. While Greece may have a little more flexibility compared to when the funding comes from official loans, of which almost every penny is clearly assigned, there will be little wiggle room. As even those countries outside bailout programmes have found, the oversight at the eurozone level is now quite significant. Greece’s budget still has to be agreed in tandem with the EU/IMF/ECB Troika, and little flexibility is likely to be allowed, especially since there is already an outstanding funding gap which needs to be filled.