Has the ECB actually moved closer to QE? 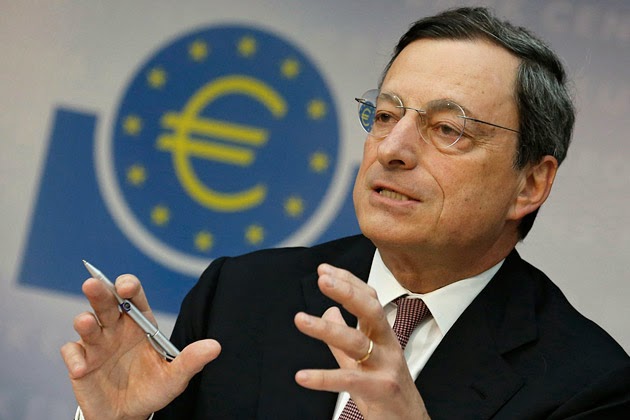 There has been a cacophony of comments from ECB members and ECB watchers over the past few days. However, the overriding view since ECB President Mario Draghi’s press conference last week is that the ECB has now moved a step closer to unconventional action such as Quantitative Easing (QE).

This is mostly down to two factors. First the following statement from Draghi’s presser:

“The Governing Council is unanimous in its commitment to using also unconventional instruments within its mandate in order to cope effectively with risks of a too prolonged period of low inflation…this statement says that all instruments that fall within the mandate, including QE [Quantitative Easing], are intended to be part of this statement. During the discussion we had today, there was indeed a discussion of QE. It was not neglected in the course of what was actually a very rich and ample discussion.”

Second, the FAZ report over the weekend that the ECB has been modelling the impact of a €1 trillion per year (€80bn per month) QE programme. While it suggested that such a programme would only raise inflation by between 0.2% and 0.8% (not a significant amount given the cost), the simple fact it is being modelled has been enough to give markets hope.

We believe QE or similar measures have become a bit more likely, but mostly because the market now seems to expect action and if the ECB is to maintain its credibility it will need to do more than simply talk.

That said, while there may be ‘unanimous commitment’ to using such measures when needed, it’s still not clear what the criteria are for such action and it is even less clear that all members of the GC agree on when such action would be needed. Draghi was pushed on this on the first question during the Q&A session, however, he never provided a direct answer.

Furthermore, much of the coverage has suggested that QE is in fact closer because the ideological opposition to such a measure at the Governing Council (GC) level has crumbled – although we’re not sure that such a clear unified opposition ever really existed.

With this in mind then, it’s worth once again pushing the point that, in fact many of the issues with further easing are practical, political and/or legal rather than ideological at the ECB. We have previously analysed each measure in detail, below is a summary and links to all those posts:

Quantitative Easing (purchasing government debt)
We have detailed the issues extensively here (but also here and here). Draghi has hinted of these practical issues before, highlighting that they need time to design the programme and gather more information. Beyond political opposition in Germany and the legal limits to ECB financing governments, there is a clear problem in that the purchases would need to split according to the ECB capital key, meaning little would flow to the periphery where the deflationary forces are strongest. Add onto this the fact that QE in other countries has not been proven to boost the real economy or even bank lending as well as that it may exacerbate the squeeze on safe assets and it becomes clear that practically and technically this would be a very difficult step for the ECB to take and is not well suited to tackling the problem of low inflation.

Quantitative Easing (purchasing private assets)
See our detailed analysis here. The thrust would be to target purchases of assets which would help promote bank lending – the main one discussed is Asset Backed Securities (ABS), particularly ones made up of loans to the real economy. However, these markets in Europe are small and underdeveloped meaning the level of assets available and suitable for purchase would be minimal. The ECB has suggested it wants this market to grow but it’s tough to force such a move, especially in the short term.

Negative deposit rate
We analysed this option here. Since then the ECB seems to have made progress on the technical implementation of such a move. That said, the impact remains very uncertain. It could further reduce excess liquidity, force money market funds to shutter and force banks to pass costs onto consumers. On the plus side it could help weaken the euro.

A targeted LTRO (similar the Bank of England’s Funding for Lending Scheme)
Discussed, with other measures, here. A fairly simply option to take, however, given that there is already full allotment (unlimited liquidity at low rates) and banks have already repaid a lot of the previous LTROs there is no guarantee there would be any significant take up or that it would filter through to the full economy.

Ending sterilisation of the Securities Markets Programme (SMP)
A smaller measure, discussed in this post. While it would stop liquidity being drawn out of the system on a weekly basis, it’s not clear that this liquidity would flow to the real economy.

Further standard measures such as rate cuts and changing collateral rules
We rounded up such options a while ago here. Given that rates are already so low and that the transmission mechanism remains broken, the impact of such moves is likely to be limited to signalling intent rather than hoping for any significant return.

Overall, nearly all of these measures face quite serious practical, technical and/or legal obstacles.

Furthermore, it is unlikely that there is any consensus at the ECB GC level of when each measure is needed or what the triggers for such action are. The obstacles are also probably viewed to be different sizes by each national central bank. All that is to say, while it may have moved slightly closer, don’t yet count on QE being much more than a last resort.