Rutte shows Clegg how its done on EU reform 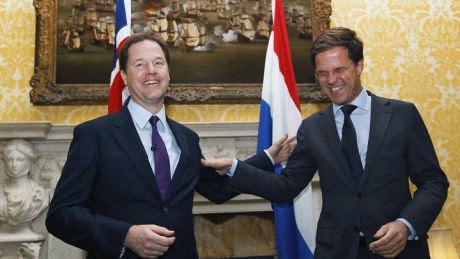 In fact it was the Dutch Prime Minister Mark Rutte, who once again today reaffirmed his credentials as a key proponent of EU reform with a speech to the FDP in Berlin.

As we have also noted before, the Netherlands (both the country and its government) is becoming a bit of a breeding and testing ground for ideas on EU reform. In his speech Rutte said:

“A lot of people in Europe are angry at the EU. Angry at those who sat at the controls in Brussels during recent years. Our common project of peace becomes, if we don’t recognise this on time, a project of discontent.”

“We won’t restore the future and the belief in a functioning Europe with European elections or with European ‘spitzenkandidaten’. The ball is now in the court of national parliaments. Their legitimacy is greater than that of the European Parliament. So they should deal at an earlier stage and also more intensely with decision making in and from Brussels”

“European where necessary, national where possible. Tasks such as healthcare, education and taxation really are things which are for the Netherlands to decide, I think.”

“That’s why the European Commission should be given four core tasks: to strengthen the single market, to stimulate international trade, to more strictly apply agreements made and to only regulate in Brussels what really must be dealt with at the European level.”

“All too often agreements regarding the budget or the democratic rule of law haven’t been respected…Europe is more and more being associated with an anonymous, formal and impersonal layer of government where national sovereignty is being replaced by normative rules ‘from Brussels’”.

Lots of overlap (at least in tone) with what Chancellor George Osborne and German Finance Minister Wolfgang Schäuble laid out in the FT last week.

There was however one of Rutte’s comments lacked credibility:

“Unemployment is the biggest problem of our time. I see it in my circle of friends.  You probably do too…”

Admittedly we’re not familiar with the Dutch Prime Minister’s circle of friends but we find it hard to believe many of them are struggling for work…Nevertheless, Clegg could learn a thing or two.