This could easily be a standard monthly headline. As before the past four or five ECB meetings, the questions of deflation and further easing are once again weighing on the ECB Governing Council and the markets.

Over the past month the market has come full circle from essentially ruling out any further ECB action to almost expecting some purchases of assets (both accompanied by the respective strengthening and then weakening of the euro exchange rate).

This was topped off today with the latest inflation data which showed that inflation in the eurozone has dropped to its lowest level for five years (annual rate of 0.5%). 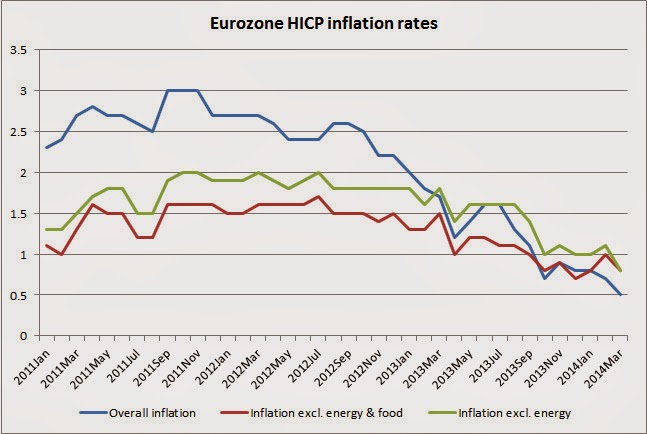 A couple of points to note on this data:

The other aspect adding weight to expectations has been dovish comments by ECB members, notably by Bundesbank President Jens Weidmann. Many believe this has “opened the door” to significant action by the ECB. Open Europe’s Raoul Ruparel addressed this issue on his Forbes blog on Friday arguing:

“The real issue from a German perspective is not necessarily that the door was ever firmly closed (or open) but that we remain someway from the QE door and to get there would require carefully negotiating some politically and legally explosive obstacles.”

“In the end, I think we find ourselves in a fairly similar position to last month (albeit having gone through a cycle of over scepticism and now over optimism) – further action remains possible but not yet highly likely.”

This meeting will be another one to watch but so far the ECB seems strongly wedded to its new communication and forward guidance policy, which it believes can allow greater control over rates markets, it is not yet clear whether it is willing to abandon this approach or push it over the barrier into full on policy action.