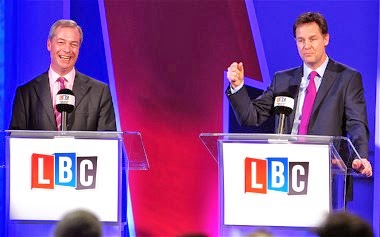 The first EU debate between Nick Clegg and Nigel Farage on LBC was for the most part restrained with a surprising amount of detail and substance. Most of the key fault lines in the UK-EU relationship were touched on.

However, given that the two men represent the polarising ends of the debate, there were also a number of claims that struggled in the accuracy department. Here is our quick ‘fact-check’ of the key debating points:

Claim – Clegg: I supported a referendum on Lisbon

On the referendum question, Clegg said that when it came to new EU Treaties transferring new powers to Brussels,

“I’ve never wavered in that position, that’s why the last time the rules changed, something called the Lisbon Treaty, I said there should be a referendum.”

It is true that the Liberal Democrats called for referendum on Lisbon but crucially it was an in/out referendum which was not on the agenda at the time – the issue wasn’t even put to put to a vote. There was however a vote on whether to have a referendum on the Lisbon Treaty itself on which the party abstained, despite the fact that together Tory MPs, Lib Dem MPs and Labour rebels could have passed it. Clegg is being highly disingenuous by blurring the distinction between an in/out referendum and a treaty specific one. Farage’s quip that there was no point waiting for a new Treaty as powers were being transferred to the EU every week via directives and ECJ rulings was quite effective in this context.

Claim – Farage: Under EU rules we have a completely open door to 485 million Europeans

Verdict – Partially true but unclear on the numbers

It is true that the free movement of labour is a fundamental principle of the EU and the UK cannot limit the numbers of EU migrants coming over. However, Clegg was right to point out that the right to free movement is not completely unqualified – under the free movement directive migrants have to be able to support themselves financially or have ‘reasonable’ prospects of finding a job.

In terms of Farage’s 485 million figure though we have to say we are a bit confused as to where exactly this comes from – the population of the EU28 is around 506 million, which minus the UK’s approximately 63 million leaves 443 million.

Claim – Clegg: 3 million jobs would be at risk if UK left the EU

Verdict – Highly unlikely – would depend on a range of other factors

Clegg cited the well-worn ‘3 million jobs linked to the EU figure’ despite established doubts over its veracity. Recently those tending to cite this number have replaced “depend on” with “linked to” but it’s still dubious. As we’ve argued in the past, this claim is one of the most conspicuous examples of a rogue statistic without any credible counter-factual attached to it. The assumptions behind the 3 million jobs figure is that there would be no trade at all trade with Europe if the UK left the EU, which of course is nonsense –  a similarly heroic assumption to that which Better Off Outers make when calculating the cost of EU membership based on all regulatory cost magically disappearing on Day 2 post-Brexit.

Claim – Farage: UK would hold the whip hand in negotiations over a new trade deal with the EU

Farage argued that in the event of an exit, the UK would “hold the whip hand” in trade negotiations with the EU due to the EU’s trade deficit with the UK. We’ve looked at this in detail – the key point is that while this is true in the area of goods, when it comes to services – a crucial and thriving area of the UK economy – this is not the case. So with that logic, EU countries would have incentive to strike a deal with the UK in goods but not services including financial services. Secondly, the process for leaving the EU – the so-called Article 50 – actually involves less control for the UK than is often assumed, including a Qualified Majority Vote on the final deal in which the UK will not take part. 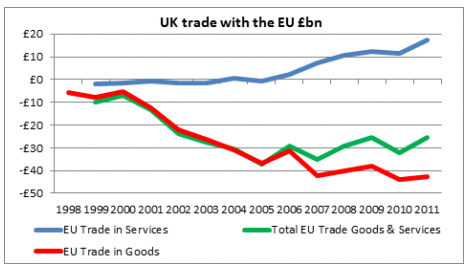 Verdict – Both are wrong

The contentious topic of how exactly how many UK laws are derived from the EU also came up, with Farage gleefully citing Viviane Reding’s absurd claim that 75% of UK laws are decided in Brussels (as we’ve argued many times, Reding must secretly be on the UKIP payroll). Clegg went with the House of Commons’ Library’s briefing which estimated this to be around 7%. Regular readers will know we’ve analysed this in painful detail and the truth is it is simply not possible to say exactly – what’s clear is that it’s neither 7% (this only counts primary legislation which isn’t meaningful at all) nor 75%. (But basically too many).

Claim – Farage: We give the EU £55 million per day

Farage is correct that the UK’s contribution to the EU works out as around £55 million per day. However, that it is a gross figure which does not include the UK rebate (cold, hard cash the UK gets back from Brussels every year) and nor the UK’s receipts from the EU budget (even if this is only UK taxpayers’ cash being re-routed via Brussels).

Claim – Clegg: Without the EAW we’d struggle to extradite criminals and terrorists

The European Arrest Warrant (EAW) is used by EU states to speed up extradition procedures. It is true that the EAW has been used by the UK to recover suspected terrorists and other criminals from other EU states who have subsequently been found guilty and locked up. It is however untrue to claim that suspects such Hussain Osman and Jeremy Forrest could not have been recovered without it. Also before the EAW was agreed, there were agreement on extradition and the UK managed to successfully extradite plenty of criminals from EU countries through bilateral procedures. These were considerably slower but it is highly unlikely that with or without the EAW Italy would have wanted to hang on to Hussain Osman or France to Jeremy Forrest.