Like all political obsessives up and down the country I’ve stocked up on popcorn ahead of Nick Clegg and Nigel Farage’s upcoming duels over Europe in anticipation of some captivating political theatre. However, from my more sober perspective as a political analyst, such a binary, ‘all-or-nothing’ debate over Europe is fundamentally flawed as it does not speak to where the majority of the British public are at. Polls have consistently shown that when respondents are offered options beyond staying in on the current terms or leaving altogether, the option of staying in a reformed/slimmed down EU proves the most popular across the political spectrum.

People hold different views about how they would like to see the European Union develop. Which of these statements comes closest to your view? (click to enlarge) 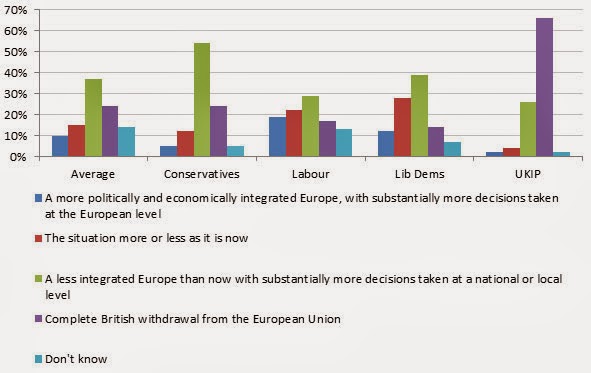 As the polling demonstrates, the public is split over the question of the UK’s future in Europe, although staying in a less integrated Europe is by far the single most popular option across the political spectrum, including among Lib Dem voters (more so than among Labour voters!) and even among a substantial chunk of UKIP voters. The concern is that the debates will focus on whether the UK ought to leave or stay in at any cost, thereby ignoring the wider debate about how best to achieve EU reform.

David Cameron’s EU policy may suffer from a number of shortcomings but to his credit, he is at least trying to achieve the reforms that a majority of the public want. Nick Clegg has also acknowledged that the EU needs reform on a number of occasions and he recently set out a “bold” three-pronged agenda based on further trade liberalisation within the single market as well as between the EU and the rest of the world, slimmed down EU institutions and less regulation, and greater democratic accountability via an increased role for national parliaments. This is welcome, even if it falls short of the more ambitious and comprehensive vision for EU reform – with powers flowing back to member states – that he set out back when he was an MEP.

However, at the same event, he undermined his own message by claiming that the most that Cameron’s reform strategy could achieve – which includes all the objectives set out by Clegg himself – as “a few crumbs from the top European table… a little tweak here and there”. This is hugely unhelpful as it plays into the narrative that the UK has virtually no influence over the direction and development of the EU and must take what it is given.

Moreover, there are large gaps in Clegg’s argument when it comes to the future of UK-EU relations. How would the Lib Dems react if the UK were to lose an EU legal case over the safeguards it applies to prevent potential abuse of the UK welfare system by EU migrants? The party supports the so-called ‘right to reside test’ so would they accept its axing at the behest of the European Commission and Court of Justice? Likewise, the party supports safeguards to prevent the rules of the EU’s single market from being set by the Eurozone bloc to the detriment of non-euro member states. Would Lib Dems still insist on staying in if in the longer term the EU became an extension of the Eurozone?

This all matters because in the event of the Coalition being extended post-2015, the two parties will have to hammer out a common position on EU reform/renegotiation prior to a 2017 referendum which Cameron has made clear is an absolute red line for him. Hopefully, Clegg will use the debates to flesh out his ideas for EU reform in greater detail instead of repeating discredited claims about 3 million jobs being lost in the event of an exit. Ultimately, with the public more or less split down the middle on the in/out question, reform is not only not only worth pursuing as an end in itself, but also as a means of securing an ‘in’ vote when the referendum eventually comes.