The Battle of Londongrad? What does the data actually say?

On Friday afternoon Open Europe released a new flash analysis looking at the links between the City and Russia.

Much has been written on this issue – see NYT, FT and Economist for background.

While there is anecdotal evidence in these articles about City links to Russia, they fail to delve deeper into the data and, importantly, lack any context as to what Russian business means to a city and financial services sector the size of London.

The summary of the piece argues:

“Claims that the City of London would suffer major losses in case of financial sanctions against Russia are overblown. While it is true that there are some sizeable Russian investments in London, and it is home to a disproportionate number of Russian oligarchs, these are far from critical to a global financial centre such as London. The stock of Russian international investments in London is sizeable at £27bn, but it only accounts for 0.5% of total European international assets invested in London.”

“For all the talk of the large number of financial services provided to Russia, these only amount to 1% of total UK exports of financial services, business services and insurance. This would suggest that accusations that the UK Government is blocking tougher sanctions over fear of losses to the City don’t match the facts.” 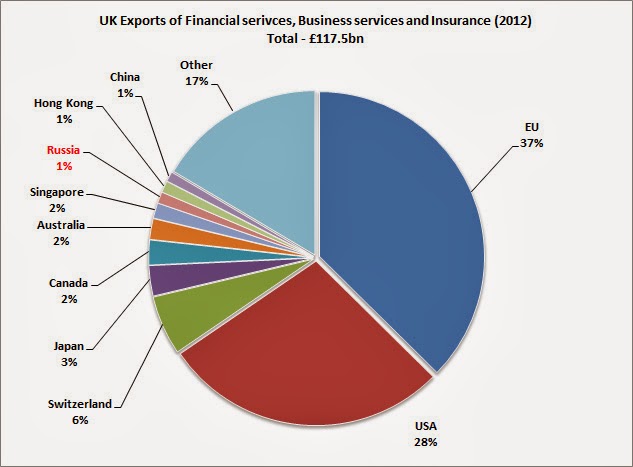 “Sanctions related to financial or capital markets, for example severing access to credit for state-owned enterprises or Russian banks, might be an effective strategy to exert more pressure on Russia (given its reliance on external financing). Such move would be far more damaging to Russia than the City of London – though it may involve some losses for the latter. This should not, and does not seem to be, a big concern for the UK government. In any case, if things get to this stage, other EU countries may suffer far greater losses than the UK through wider economic sanctions hitting, for example, gas supplies and exports.”

There are plenty of factors to consider when looking at sanctions. While the City is one of them, in the scheme of the broader European links to Russia it does not seem huge (compared to some economies complete energy reliance). Furthermore, given the size of the City as a global financial centre the links to Russia seem to fall far short of the critical billing they seem to have been given.