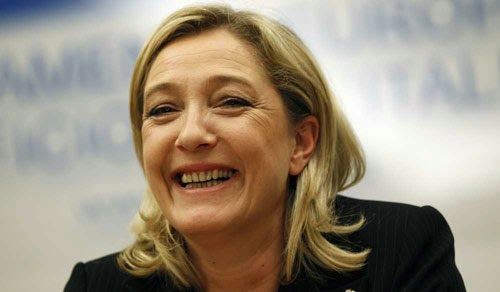 Yesterday was a big night for Marine Le Pen’s anti-EU Front National, which emerged as the main winner of the first round of the French mayoral elections. The party won an outright victory in Hénin-Beaumont, a former mining city in northern France, and finished ahead in six other towns – where its score ranged from 27.69% (in Digne-les-Bains) to 40.3% (in Fréjus).

In Marseille, the second most populous French city, Front National finished second with 23.16% of votes, behind the centre-right UMP (37.64%) – relegating President François Hollande’s Socialist Party to third place, with 20.77% of votes.

We will have to wait until tomorrow evening for the final results. But, according to the preliminary figures made public by French Interior Minister Manuel Valls, the centre-right (that is, the UMP and its allies) won 46.54% of votes nationwide – well ahead of the centre-left (Socialist Party and allies) on 37.74%. So not exactly a night to remember for Hollande.

Le Pen’s party was only running in 597 of the almost 37,000 municipalities up for grabs, and therefore won only 4.65% of votes nationwide. However, this is much better than in 2008 – when Front National only managed to run in 119 municipalities and won around 1% of votes nationwide in the first round. This suggests it may be consolidating as an electoral force at the local level.

The second round of the mayoral elections will take place on Sunday 30 March. Interestingly, several top Socialist figures (from Hollande’s spokeswoman Najat Vallaud-Belkacem to Prime Minister Jean-Marc Ayrault) have called for the centre-right to support a so-called Front Républicain – whereby the Socialists, the UMP and other centrist parties join forces to stop Front National candidates prevailing in the second round. However, UMP leader Jean-François Copé has this morning dismissed the idea.

So unlike Geert Wilders in the Netherlands, whose PVV party saw its support decrease slightly in last week’s Dutch local elections, Front National is on a clear upward path – and it would be no surprise if it came out as the largest party in the upcoming European Parliament elections. It will be interesting to see how yesterday’s results will influence the campaign. We have already noted that several centre-right French politicians – including Nicolas Sarkozy himself – have embraced, at least in rhetoric, a less idealistic approach to ‘Europe’. Given the Front National’s strong showing, this is only likely to continue.