Irony alert: Farage could be the biggest loser if Le Pen and Wilders manage to form a new anti-EU group in the European Parliament 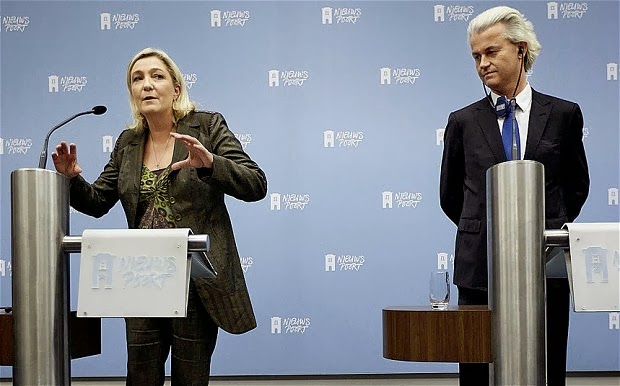 Belonging to a group in the European Parliament matters. Groups receive money on top of individual MEPs’ allowances and are given additional group staff. It also boosts chances of representation on committees (where EU laws are discussed and amended before they are put to a vote in the plenary).

Therefore, the prospect of Marine Le Pen, the leader of France’s Front National (FN) and Geert Wilders, the leader of the Dutch Freedom Party (PVV), forming a new anti-immigration, anti-EU group in the next European Parliament is causing some distress around Europe. When this was last attempted – with the so-called Identity, Tradition, Sovereignty (ITS) group – it quickly fell apart. The Greater Romania Party (PRM) didn’t quite approve of Alessandra Mussolini – the granddaughter of you-know-who – labelling Romanians “habitual law-breakers” and thus withdrew from the group. Rather telling.

So will Wilders and Le Pen succeed to unite parties that, per definition, don’t always like each other? According to EU rules, 25 MEPs from at least a quarter (seven) EU member states are needed to form a group.

By our count, at least four more parties from as many EU countries look willing to join forces with FN and PVV: Italy’s Lega Nord (who currently sits in the same group as UKIP), Belgium’s Vlaams Belang, the Austrian Freedom Party (FPÖ) and the Sweden Democrats (whose leader today said they are considering joining). This leaves FN and PVV only one party and country short.

This could be filled by, for example, the Slovak National Party (SNS) – which is pretty hardcore, and currently sits with UKIP. Bulgaria’s Ataka would probably also be quite keen to join, though Le Pen recently called the party “the real extreme right” (not meaning it favourably). Greater Romania may struggle to reach the 5% national threshold needed to win seats in the European Parliament, but could be another possibility.

The Danish People’s party has said it won’t join the group, while Greece’s Golden Dawn and Hungary’s Jobbik seem to be off-limits for everyone.

So this might come down to the wires. An interesting twist, though: if Le Pen/Wilders succeed, this could mean problems for Farage. UKIP currently sits in the Europe of Freedom and Democracy (EFD) group – which includes 31 MEPs from twelve different countries, but:

So Farage could need both new parties, additional MEPs and more countries to be able to set a group after May’s European elections. And if not managing a group of his own, where will he go? Will he reconsider his decision not to join forces with Marine Le Pen, something he ruled out in the past  when he said UKIP and FN are from “completely different political traditions and background”?