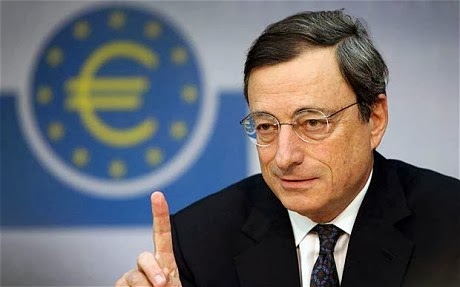 Over on his new Forbes blog, Open Europe’s Head of Economic Research Raoul Ruparel lays out his take on why the ECB decided to stand firm despite the apparent deflation threat,

“My feeling is that there are two broad reasons. The first being that the flow of data is mostly positive, and the second, more important factor, being that none of its tools are economically, politically or legally suited to tackling the low inflation environment in the eurozone.”

“All in all then, the tools at the ECB’s disposal are far from suited to helping push up inflation in the struggling countries and boosting lending to the real economy to help economic growth. This is not to say the ECB would never use them, but that are better suited to a deeper more acute crisis (such as a break-up threat) than the chronic long term malaise which the eurozone currently finds itself in.”

These are themes we’ve explored plenty of times on this blog so won’t rehash here.

But there were a couple of other interesting points to come out of ECB President Mario Draghi’s press conference though.

The first being his mention of a new dataset which the ECB is looking at, specifically the “the high degree of unutilised capacity” in the eurozone economy. This refers to the ‘output gap’, i.e. the amount by which GDP in the eurozone has fallen below potential GDP. As you might imagine, estimating such a gap is fraught with difficulty and estimates are notoriously revised retrospectively (for example before the crisis few economies were seen performing above potential despite huge financial, real estate and debt bubbles).

Why is this important? Well, it could be the first step towards a more firm GDP target on the part of the ECB. Admittedly, it’s a small step and a full GDP target is unlikely but it could be an interesting shift for the ECB which has traditionally focused more on inflation, money market and private sector survey data (such as the PMIs). As Draghi himself said, it also shows that monetary policy will stay looser for longer, even if the data improves, due to the large gap between actual and potential GDP. It will be interesting to watch how this one develops over the next few meetings and whether the ECB decides to put any more emphasis on this measure.