Will EU leaders agree on sanctions for Russia? 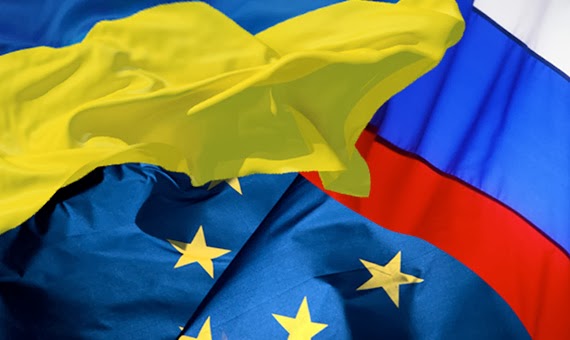 EU leaders have arrived in Brussels to discuss the situation in Ukraine, the details of the €11bn aid package announced by Barroso yesterday and how to respond to the Russian occupation of Crimea. At PMQs yesterday, Cameron said that the EU should “display a unity of purpose” and “speak with a clear voice”. So what are the prospects for that? We look at the positions adopted by the key players below:

UK: Although it appeared that the UK was ruling out taking supporting strong economic sanctions on the basis of a leaked memo on Monday, since then both Nick Clegg and David Cameron have all said that no economic and diplomatic measures would be off the table. Foreign Minister William Hague indicated yesterday today that “we can’t make progress on that, then of course there will be costs and consequences [for Russia]”. Interestingly, he added:

“I think the UK and France are very closely aligned. The Prime Minister has held discussions with President Hollande and with Chancellor Merkel over the last couple of days by telephone.”

Germany: As ever the one to watch. The government has hinted that sanctions could be on the table but Foreign Minister Frank-Walter Steinmeier has stated his preference for a political solution and warned against “adding even more fuel to the fire.” There is a lot of resistance to sanctions in Germany, and not just in the SPD which has traditionally been seen as favourably disposed towards Moscow. Senior CSU MP Peter Gauweiler, said that:

“If Germany and Russia had a good relationship, then that would be good for Europe. We are looking for a partnership with Kiev, but just as much with Moscow too.”

The German Chambers of Commerce and Industry (DIHK) has warned against sanctions on Russia, saying they “could significantly harm Germany”. Germany’s relatively strong dependence on Russian energy sources (30% of its gas and 35% of its oil) as well as its strong exports to Russia (€76.5bn of trade between the two countries annually) give it a strong incentive to avoid wide-reaching economic sanctions.

France: President Hollande has said that, “Russia has taken the risk of a dangerous escalation” – and spoke of the possibility of sanctions, but did not specify what kind, although Foreign Minister Laurent Fabius said they could be “significant”.

Italy: Italian Foreign Minister Federica Mogherini has said “the option of a military solution doesn’t exist”, but the government’s official position is that violations of Ukraine’s sovereignty and territorial integrity “would be totally unacceptable for Italy”. In principle, Italy would back targeted sanctions on Russia. Similar to Germany, though, the approach is more doveish due to higher dependency on Russian gas.

Spain: Spanish Foreign Minister José Manuel García-Margallo said today that Spain would support targeted sanctions, given that it endorsed the conclusions of the meeting of EU foreign ministers on Monday. Then he added, “I said and I say that we wish that the situation calms down and the de-escalation happens” – so the EU is not obliged to resort to sanctions.

Poland: Along with Sweden, Poland has taken the toughest stance on the Ukraine issue. Speaking in parliament yesterday afternoon, Prime Minister Tusk did not pull his punches; he demanded that the EU uses all the tools it has at its disposal, in effect calling for wide-ranging sanctions on Russia, adding that Poland was prepared for this eventuality having stockpiled significant gas reserves. He also made a pointed reference to Europe’s “catastrophic” experiences with appeasement in the past.

Tusk: EU needs to be determined and use all its available tools not in order to escalate the situation but in order to de-escalate it
— Pawel Swidlicki (@pswidlicki) March 5, 2014

It now appears likely that some measures will be taken against Russia, the question is how wide ranging these will be. We assess the likelihood of a number of options in the table below: 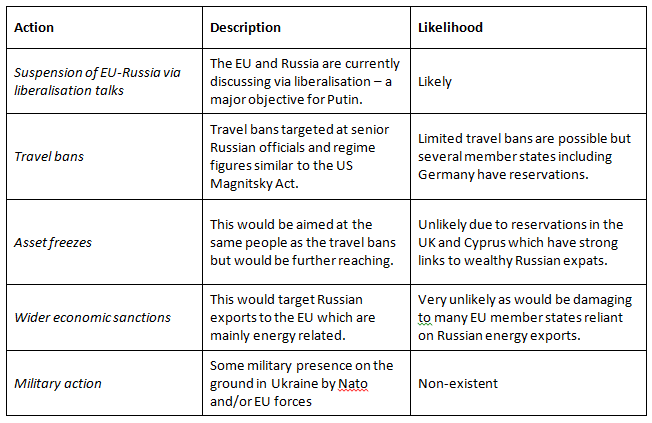 What is clear so far is that there remains several different views among EU governments on how large a stick they should wield. The upshot is that the US will probably be forced to take the lead role in confronting Russia.