European Commission gives Germany a slap on the wrist for its current account surplus, but shirks stronger action 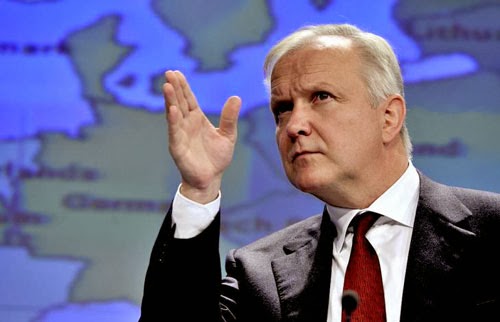 This is the follow-up to the report which caused quite a stir back in November, as pressure from the Commission and the US mounted on Germany over its significant current account surplus.

This report had been billed as the arena for the Commission to finally rip into Germany for feeding the imbalances in the eurozone and hampering the periphery’s chances of recovery (although, as we noted back then, to us this is not quite the case in reality).

So, what has the Commission done? Well, it seems to have backed away from this somewhat and given Germany more of a slap on the wrist.

The Commission does say that German imbalances require “policy action” but notes:

“The current account has persistently recorded a surplus at a very high level, which reflects strong competitiveness but is also a sign that domestic growth has remained subdued and economic resources may not have been allocated efficiently.”

Not exactly the strong wording some might have been hoping for. Crucially, it also appeases Germany by suggesting:

Plenty, including some peripheral eurozone countries and the US, might disagree with this assessment, but it’s clear the Commission has been very careful in how it phrases its criticism.

It does go on to outline the need for “sustained policy action” to boost domestic demand and rebalance away from export led growth. But then it also accepts that this is already happening and that the current account surplus Germany has with the rest of the eurozone has been “receding” since the onset of the crisis. There are few specific policy recommendations in there and the general tone is balanced but with a bit of edge to warn Germany of the need to focus on boosting the domestic economy.

As such this assessment may disappoint those who were looking for a strong position, but to us it is in keeping with the current data and evidence. All that said, there might be a double whammy in there for France and Italy as they come in for some surprisingly strong criticism.

France has dodged being moved to the group of countries with excessive macroeconomic imbalances this time around, but the European Commission’s assessment is far from optimistic. France is losing competitiveness for a number of well-known reasons: high labour costs (primarily driven by high payroll taxes), an “unfavourable business environment”, a “low level of competition” in the services sector and “rigidities in the wage-setting system” resulting in “difficulties for firms to adjust wages to productivity”. Compared to the vague comments on the German economy this is a pretty specific series of sectors which need specific policy action.

France’s public finances are another source of concern, since public debt is on the rise and the European Commission expects Paris to miss its deficit targets “over the entire forecast period” – that is, at least until 2015. This seems to confirm that France is obliged to deliver on economic reform this year. Otherwise, being ‘downgraded’ to the club of countries with excessive macroeconomic imbalances will be hard to avoid.

Italy also gets a pretty damning assessment, and joins the club of countries experiencing excessive macroeconomic imbalances – and potentially most exposed to the risk of fines. According to the Commission,

“Reaching and sustaining very high primary surpluses – above historical averages – and robust GDP growth for an extended period, both necessary to put the debt-to-GDP ratio on a firmly declining path, will be a major challenge.”

This assessment, along with the Commission’s repeated hints at Italy’s “chronically weak growth”, paints a pretty clear picture of the size of the challenge facing Matteo Renzi and his government – essentially reversing Italy’s recent economic history and trying to ensure surpluses for decades to come.

We would also like to pick up on the comments on Finland – a new running theme on this blog, you might have noticed. The report highlights similar issues to ones we did, in terms of some big challenges facing Finland, notably, “industrial restructuring”, “deterioration in competitiveness” and a “declining working age population”.

But it is not bad news for everyone. The Commission, for instance, gives Spain a pat on the back by removing it from the group of countries with excessive macroeconomic imbalances. This because, according to Olli Rehn and his team, “The adjustment of the imbalances identified last year as excessive has clearly advanced, and the return to positive growth has reduced risks.” In practice, this means Spain does remain under surveillance from Brussels – but is no longer at immediate risk of sanctions.

The fallout over the next day or two will be interesting, especially with the German media today reporting that internal German government documents admit some problems with the current account surplus (see our press summary and we’ll have more in a blog post soon).