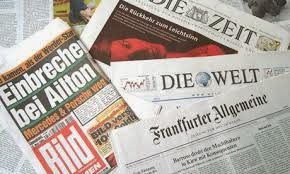 Merkel’s big speech yesterday was being trailed in the UK media almost a week in advance while the German media only began to cover it the day before. Its fair to say it didn’t completely dominate the news in Germany yesterday – not with the conclusion of the trial of former German President Christian Wulff – but it nonetheless attracted a lot of coverage, comment and analysis. Here is our round-up of key German responses:

In terms of the speech itself, German media and commentators broadly picked out Merkel’s call for the UK to stay in and help shape the EU, although N-TV went with “Merkel leaves Cameron hanging”. Today’s headlines and comment pieces make for interesting reading; FAZ headlined their write-up with ‘Chancellor Jein’ – Jein, for those who haven’t worked it out already is a combination of Ja & Nein. Süddeutsche Zeitung goes with “Merkel’s lecture in Europe realism” adding that “she didn’t close doors but remained vague”. Die Welt says “Merkel meets the Queen and resists Cameron”.

“The UK and Germany share a staggering amount of common ground… the list of common interest has now even been extended by a very important point: both Germany and the UK want to readjust the institutional structure of the EU… [However] even if the Chancellor wanted to she could not give Cameron a special status [for the UK in the EU]… Merkel has offered a limited EU treaty change for the Eurozone and that the EU Commission will voluntarily commit to stay out of specific policy areas. Now the ball is in the British court.”

Die Welt columnist Alan Posener writes in the Guardian that:

“Cameron will get his treaty changes sooner or later. In return, he should learn to walk the European walk and talk the talk – as Merkel does, while pushing a German agenda.”

In a separate comment piece in Die Welt, Posener argues that a more integrated eurozone but with the possibility of other powers flowing back to member states would

“not create a Europe of ‘two-speeds’, but a freer Europe of differences and choices. Those who want more integration should be able to go down that path; those who prefer a looser European ‘dress’ should not have to leave the EU for that”.

“Those, like the British Premier David Cameron, who hope for a herculean reform effort of the EU, including comprehensive treaty change, do not understand the EU. Europe moves cautiously, step by step, fittingly like the German Chancellor, with or without crutches.”

“What are the concrete plans for the strengthening of the economic and monetary union? Should governments agree on a common economic policy or does this competence go to the [European] Commission? Above all in terms of the Commission: which of Cameron’s complaints about Brussels are justified? Where do competences have to be checked and be trimmed back?”

In conclusion the broad response of the German media is much as we argued yesterday – Merkel did not give much away but left the door open to reform.