We’ve put out a new poll this morning in conjunction with You Gov ahead of German Chancellor Angela Merkel’s visit to the UK tomorrow. The results make for some interesting reading and suggest there are plenty of areas of agreement between the Brits and the Germans. Whether this can translate into a new Anglo-German bargain and wider EU reform remains to be seen, but it provides a good basis for discussions. 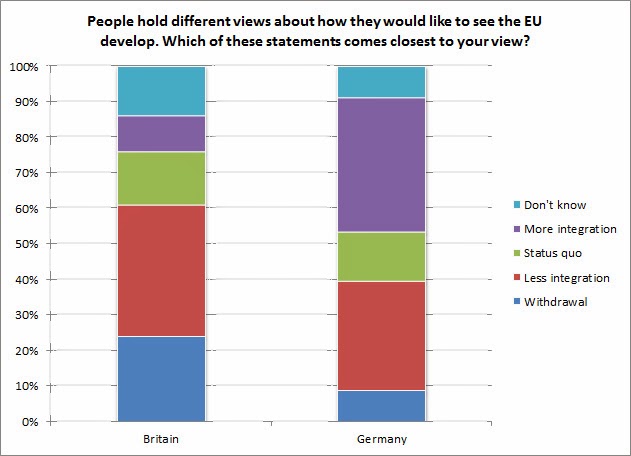 Among British respondents, a less integrated Europe with more decisions taken nationally or locally, is by far the most favoured option (37%). 24% want complete British withdrawal, 15% favour the status quo and only 10% would like more integration with more decisions taken at the European level. This illustrates that rather than a straight in or out choice, the British public has a clear desire for reform. It is now up to the UK Government to deliver a clear reform programme.

While more German than British respondents were sympathetic towards the prospect of more EU integration, a majority in both countries think that national parliaments rather than the European Parliament should be the ultimate check on new EU laws (see graph above, click to enlarge).

Furthermore, in four out of six key policy areas – EU migrants’ access to benefits, police and criminal justice laws, employment laws and regional development subsidies – a majority in both countries said that decisions should be taken at the national rather than at the EU level (see table above).

Plenty of scope for agreement then, but we’ll end on a note of caution. Merkel remains keen on a step by step approach and is somewhat hamstrung by her new coalition partners. Cameron will have to secure a much wider base for reform than just her, while she is also more likely to publicly back him if he has formed other alliances.