The latest Commission economic forecasts are out and the theme of a broad but still fragile recovery (combined with some gentle self-congratulations on the success of the current approach) has been continued. For the most part the forecasts are not hugely different from the Autumn 2013 ones, which we covered here.

We won’t do a country by country run down again, since little has changed. But we pick up on a few general themes below. 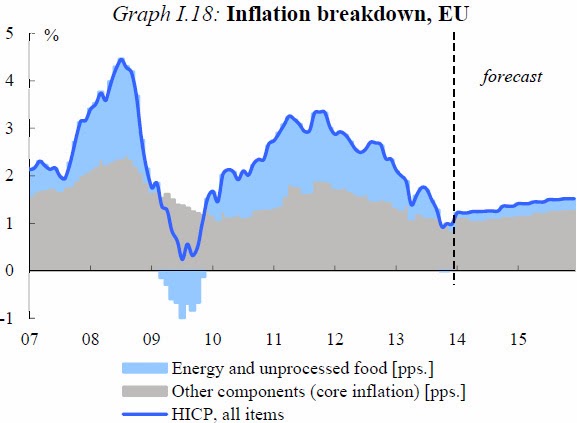 Inflation forecast cut
A metric which everyone is watching at the moment is inflation. As we have discussed before, March has been pegged as a key meeting for the ECB and is expected to be a defining choice over whether the bank takes more action to tackle inflation. The EC has cut its forecast for inflation from 1.5% to 1.1% for this year while last year’s has been revised to 1.3% from 1.5%. Despite the language being quite strong on inflation remaining low and subdued, these forecasts aren’t far from the ECB’s own and are unlikely to push them one way or another when it comes to taking further action. The graph also highlights that the view of core inflation (without energy or food prices) been on a slow decline for some time but is expected to melt upwards over the coming years. Again this fits with current ECB thinking rather than bucking against it.

Spain and Italy – diverging forecasts, but plenty of common problems
One of the more surprising points is that Spain has got the most substantial upgrade of all the big eurozone countries – with its 2014 growth forecast raised from +0.5% to +1%. At the same time Italy is the only big eurozone country whose growth forecast for this year has been revised downwards – from +0.7% to +0.6%. Similarly, on the unemployment side (while Spain remains in a much worse position) the forecast has improved somewhat for Spain and worsened for Italy. In any case, both continue to struggle with their large debt loads (more below), although new Italian Prime Minister Matteo Renzi might take the less than optimistic forecast as an important reminder of the reforms he needs to pursue, not unlike the ones Spain has undertaken…

Debt remains a problem in the eurozone
By 2015, seven eurozone countries are forecast to have public debt levels above 100% of GDP – Belgium, Ireland, Cyprus, Greece, Spain, Italy and Portugal. As the report warns, this debt overhang could become a drag on medium term growth, particularly when combined with other factors such as the knock on effects of years of depressed investment, high unemployment and falling productivity. 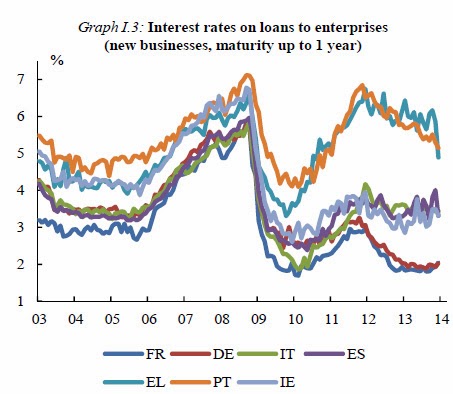 Borrowing costs for SMEs have come down but remain divergent in eurozone
As the graph highlights, there has been some improvement over the past few months. That said, borrowing costs for firms in France and Germany remain substantially below those in the periphery countries. Given the importance for SMEs, particularly in Italy and Spain, it is difficult to see a strong pick-up in economic activity or employment until SMEs can fund themselves effectively at reasonable rates.

Transition from export driven growth to a more balanced recovery
The EC suggests that the recovery is and will become more broadly balanced. As we have warned, particularly with regards to Portugal, becoming overly reliant on exports can be dangerous as it’s not clear that there will be sufficient demand to pull the economy out of its slump. That said, the Commission doesn’t entirely provide convincing ground for the significant turnaround in domestic demand and investment which is expected. With firms and households still weighed down by significant amounts of debt in much of the periphery and borrowing costs remaining high, it’s not yet clear that this can take place as quickly as is hoped. As the graph below shows, the turnaround needed is substantial. 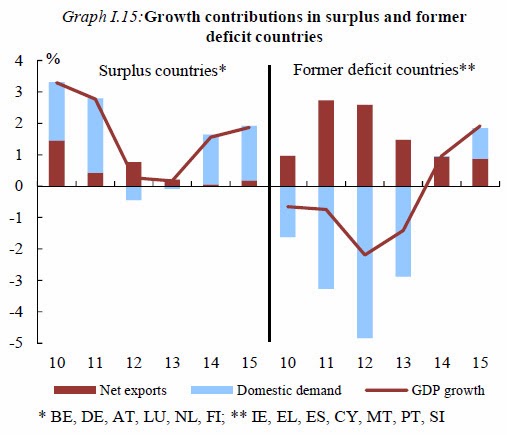 Labour market continues to lag behind
Even if you buy into other parts of the recovery, it’s clear it hasn’t yet come close to improving the serious unemployment problem in much of Europe. Divergence is also expected to remain with many of the peripheral countries having incredibly high unemployment for the foreseeable future (well beyond the timeline of these forecasts).

And finally, seriously, what’s wrong with Finland? This data marks another bad day for the Finnish government, with the Finnish economy forecast to grow by only 0.2% this year, the slowest level behind Cyprus (-4.8%) and Slovenia (-0.1%), both embroiled in the eurozone crisis.