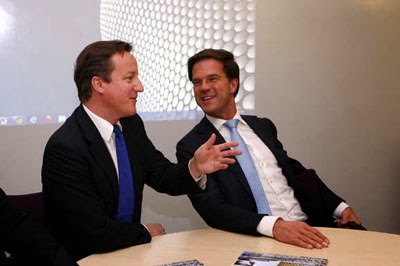 Dutch Prime Minister Mark Rutte will travel to London to meet David Cameron tomorrow and discuss various EU-related issues. Ahead of the visit, Dutch Foreign Minister Frans Timmermans gave an interesting keynote speech on Europe in Rotterdam yesterday – laying out a few issues Cameron and Rutte may discuss at their meeting.

Here are some key quotes from Timmermans’s speech (the highlights of which we featured in our daily press summary today):

It would be an exaggeration to suggest that Europe without the EU would slide into war, but it would also be naive to think it would be better if everyone went their own way.

The idea that it would be in our interest to leave the Union strikes me as nonsense…But this does not mean that there are no drawbacks. European solidarity has a downside, and we should not try to conceal it. The government recognises this fact and is working with other member states to tackle the adverse effects of the free movement of persons, for example.

Sovereignty is a paper tiger. In today’s world, if you want to serve Dutch interests you need influence…But that does not mean giving the EU carte blanche to arrogate more powers to itself. The European Union needs to be modest and understand that there is no Union without the member states…The EU exists by the grace of the member states and their democratic institutions. The EU would do well to secure greater involvement in Brussels decision-making by those democratic institutions, governments and parliaments.

We are making proposals to bolster the role of national parliaments, and [we] favour a smaller European Commission focusing on core tasks. The system of yellow and red cards, which allows MPs in national parliaments to intervene, must be further strengthened. And the Commission mustn’t brush yellow cards aside. National MPs represent national voters and their involvement in the European debate is essential.

I am optimistic. Optimistic about Europe’s capacity to find a new direction. Optimistic about our ability to reform the EU so that it works for us all in an efficient and cost-effective manner…There is no need to rewrite the [EU] treaties. What we need is for the European Council, the European Parliament and the European Commission, shortly after the elections in May, to reach a political deal setting out what the EU’s priorities will be over the next five years, and in what areas the EU will refrain from activity, so that those areas can be left to the member states.

We’ve stressed that the Netherlands is emerging as a ‘thought leader’ on EU reform. The line of the Dutch government is clear: European where necessary, national where possible.

Timmermans’s latest speech illustrates that there is plenty of common ground for the UK and the Netherlands to work on. The one snag for Cameron, though, is the repeated Dutch opposition to EU treaty change – something which Cameron has said will be part of his renegotiation. Perhaps we will know more on the treaty change front after the visit of German Chancellor Angela Merkel next week…