How does the EU solve a problem like the Ukraine?

Update 13:45 – According to Antonio Delgado, Spanish Public Radio’s EU correspondent, “diplomatic sources” have indicated that the UK, the Netherlands, Italy, Spain and Bulgaria are all “not keen” on sanctions, although the Italian Foreign Ministry issued a statement claiming that “In the event of the continuation of violence, we don’t rule out resorting to exceptional restrictive measures”.

Commission President Jose Manuel Barroso on the other hand is optimistic: 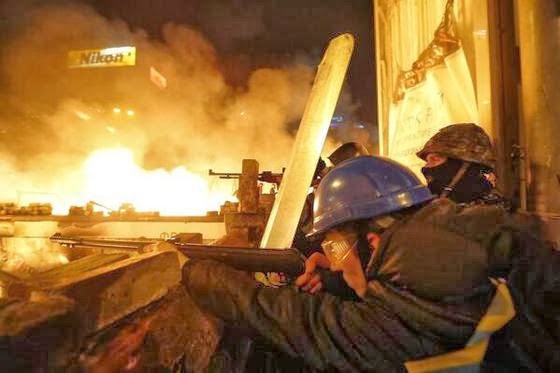 The escalation in violence in Kiev yesterday and overnight poses a huge challenge to the EU. What, exactly, can it do here to prevent continuing civil disorder on its doorstep?

As ever when it comes to EU foreign policy, the first hurdle is to actually secure an agreement among 28 member states which is difficult in itself. As we’ve said on a number of occasions, Catherine Ashton’s European External Action Service cannot magically replace 28 foreign policy positions – this has been proved time and again over Israel/Palestine, Libya, Syria etc. When it comes to the Ukraine, these differences have been apparent in how to deal with Russia in the first place, how hard it was to push for the EU-Ukraine trade agreement, then over how to deal with the anti-government protests, and now it looks likely they will appear in whether to impose sanctions. Here is a round-up of where the key EU countries stand on potential sanctions:

UK – Europe Minister David Lidington has condemned the violence and urged “all parties to return to the path of compromise and genuine negotiation” – no explicit reference to sanctions.

Poland – As the biggest supporter of Ukraine’s eventual integration into the EU, Poland has consistently taken a hard stance on the issue. Speaking in the Polish parliament this morning, Prime Minister Donald Tusk called for targeted sanctions against those individuals “responsible for the Ukraine’s misfortune”. However, he conceded these tended to have limited effectiveness, but argued they sent a “moral” signal. He also slammed Russian pressure and warned that a civil war was possible. In a rare outbreak of political unity, the sanctions were also backed by the opposition Law and Justice party.

Germany – The German government (and the SPD in particular) has traditionally been very cautious when dealing with Russia so as not to alienate Moscow unnecessarily. For this reason they had opposed sanctions – supported by many in the European Parliament – but Foreign Minister Frank-Walter Steinmeier yesterday noted that personal sanctions will now “surely be considered”. Chancellor Merkel will discuss the situation with President Hollande later today.

France – French President Francois Hollande said that he “agreed with [Polish PM] Tusk on the need for swift European sanctions, targeted at the main responsible for these acts.”

Italy – It is unclear whether Rome’s position will change following the recent developments and/or the appointment of Renzi’s new cabinet but the existing position was to oppose sanctions, with Foreign Minister Emma Bonino arguing a couple of weeks ago that “it has always been easy to announce [sanctions], but it has never been easy to apply them in a coordinated fashion. To me, this doesn’t seem the way to go.”

Sweden – Another strong supporter of Ukraine’s EU ambitions and of the anti-government protectors, Swedish Foreign Minister Carl Bild is as expected shouting the loudest, accusing Ukraine’s President Yanukovych of “having blood on his hands”.

Of course agreeing on a course of action is one thing – implementing it is another and the EU simply struggles to back up its rhetoric with ‘hard power’ due to the nature of the EU itself. The key will be how Putin responds if the situation continues to get out of hand – how will the EU respond if Moscow intervenes more directly? As the 2008 Georgian crisis showed – when the EU initially tried to present a common front – the Russians are very adept at exploiting any divisions and they still wield substantial leverage due to the reliance of many EU members on their energy resources.

Notwithstanding the need for a political solution to Ukraine’s internal problems, there is surely a wider need for the EU and Russia to come to a sensible compromise over Ukraine’s future – as the map below shows, geopolitically, the Ukraine is trapped between two large political and economic blocs (the map shows the respective customs union and potential members), and any closer political and economic integration of the Ukraine into the EU triggers Russia’s age-old fears about ‘encirclement’.