With the European Parliament elections approaching, the number of EU-related opinion polls is growing. Beyond the mere voting intentions, these surveys help get a clearer picture of how citizens see Europe in various countries.

Two separate opinion polls published in France over the past few days caught our attention. Just in case you don’t read our press summary every day – France is a particularly interesting case, given that the anti-EU Front National may well win the most votes in the upcoming European Parliament elections.

The first poll, conducted by IFOP and published by French news site Atlantico over the weekend, found that 59% of French would be in favour of France “reconsidering the Schengen agreements [which created a passport-free travel zone in Europe] and restraining the conditions for the circulation and the establishment of European citizens on its territory.” 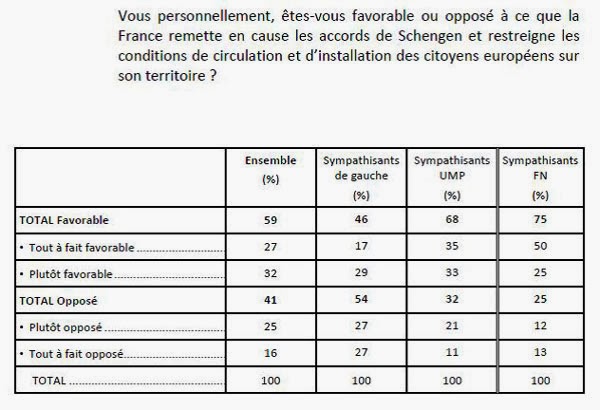 A separate OpinionWay poll for Le Figaro and LCI found that, while a solid majority of French want to keep the euro, the number of those against a return to the franc dropped from 62% to 53% since April 2012. Also, the share of respondents who think EU membership is “a good thing” for France went down from 48% to 42% over the same period – again, still a relative majority.

Interestingly, one of the questions in the poll was, “Which one of these feelings comes to mind when you think of the EU?” Well, 45% said ‘disappointment’, 18% ‘hope’ and 12% ‘indifference’. 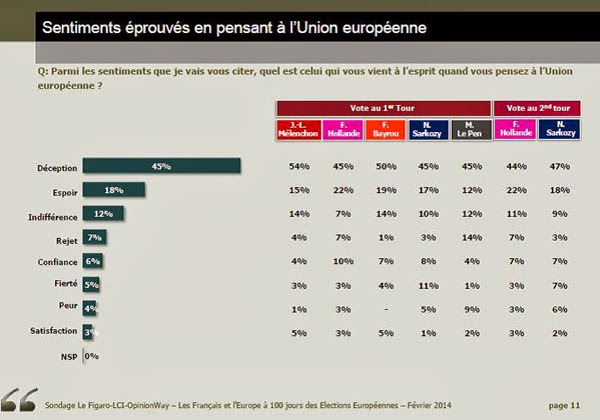 It would be exaggerated to claim that the French are turning their back on the EU, but the winds do seem to be changing somewhat, and the French electorate seems to be shifting towards a less idealistic approach to the ‘Europe’ issue. Looking at the bigger picture, this also highlights that, without sweeping reform of the EU, the risk is that voters will increasingly turn to anti-EU and anti-immigration parties – and potentially throw the baby out with the bathwater.

An increasing number of politicians across Europe have realised this, including in France. Rachida Dati, a French MEP from the centre-right UMP party, told our pan-European EU Reform Conference last month that the “disregard” of the EU elite for the citizens had to stop, adding that “it is the peoples that must impose their will to Brussels and not the other way around”.