If EU law is followed, Scotland will join the EU just before Serbia 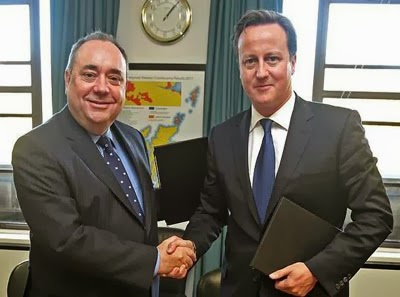 The UK must be the first country, with the forthcoming Scottish and EU referenda, to simultaneously have an intense political debate about the difficulty or otherwise of both joining and leaving the EU. Traditional assumptions are being bent in all sorts of directions, with senior UK politicians approvingly citing EU Commission President Jose Manuel Barroso for suggesting it would be “very difficult, if not impossible” for an independent Scotland to join the EU.

Like Catalonia in Spain, rightly or wrongly, Alex Salmond’s case rests in part on the argument that “if we leave one club, we can safely join another.” It’s an insurance policy against the uncertainty which is a such a killer in any referendum to change the status quo. So is Barroso right?

Iceland’s accession talks with the EU – which were terminated since the Icelanders turned cold on the idea – would, in purely legal terms, come close to those of Scotland. Iceland is part of the European Economic Area, and therefore almost an EU member. Scotland has been an EU member for 40 years. Both would face tricky negotiations, like protecting their fishing industries.

There are basically six steps (by my rough categorisation). Salmond’s biggest problem is that for half of these, each of the 28 EU states, including rUK and Spain, has a veto:

Step 1 – Scotland applies to join the EU: Under EU law, it would have to be an independent country to apply.

Step 2 – The European Commission “screens” Scottish law to see if the country is compatible with EU membership – this won’t be an issue.

Step 3 – EU governments decide whether to approve Scotland’s EU application. All EU states have a veto.

Step 4 – The EU and Scotland begin negotiations over individual EU policy areas. There are now 35 so-called “accession chapters” covering everything from the euro to employment law to the EU budget. Each country has a veto over the decision to both open and then to close every single chapter – ask Turkey how easy that has proven (read: Cyprus and France). It’s in these talks that Salmond would need to deliver on his pledge to get an opt-out from the euro, as well as replicating the UK’s special deals on the EU budget, crime and immigration and passport controls.

Step 5 – When the 35th chapter is agreed, the Accession Treaty with the Scottish terms of entry is drafted.

Step 6 – This Treaty must then be ratified by the Parliaments of each EU country and the European Parliament. If one says no, the deal falls.

Iceland officially applied to the EU in June 2009. In 2013, when the bid was dropped, it had completed about a third of the negotiations. So if the letter of the law is followed, Scotland might join the EU just before Serbia, several years from now.

However, in the EU, political expediency tends to trump the letter of the law. I suspect that, given the stakes, if the Scots do pull the trigger, the EU will engage in the kind of legal acrobatics that it’s proven so good at in order to fast-track an independent Scotland to membership, with or without a euro opt-out (though, as Andrew Lilico has pointed out, there might be a range of practical currency issues).

No matter what, it would be a mess. In truth, we have little idea what’s going to happen if Scotland goes independent. And I suspect that in itself undermines Salmond’s case.