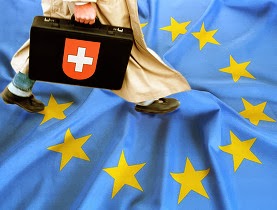 On Sunday the Swiss electorate will be asked to vote in a referendum on whether to impose migration quotas on European Union and European Economic Area nationals – a system the country currently uses for non-EU/EEA migrants. The referendum question doesn’t specify how large or what shape the quotas would take, but would instruct the Swiss Parliament to draft legislation addressing the immigration issue within the next three years.

Ahead of Sunday’s vote, it is looking very tight with 43% expected to vote in favour of the quotas and 50% against, according to a recent poll by GFS.Bern. If the referendum result goes in favour of introducing quotas, not only would it potentially end free movement between Switzerland and the EU as we currently know it, there could be much wider ramifications for the Swiss-EU relationship that would provide a landmark test case.

The Swiss-EU agreement on free movement was part of a bundle of agreements known as ‘Bilaterals I’, which covered six other areas including the Mutual Recognition Agreement, which simplifies the admission of Swiss products in to the EU market, trade in agricultural products and civil aviation (other aspects of Swiss-EU relations are governed by a 1972 free trade agreement and there is also a Bilaterals II – in total there are 20 main and 100 subsidiary agreements in place). Crucially, Bilaterals I contains a ‘guillotine clause’ stipulating that the contents can only take effect together: if one of the agreements were not to be prolonged or terminated, the others would also cease to have effect.

Nothing will happen immediately on Monday morning, irrespective of the referendum result, because if the Swiss government is mandated to impose quotas it would have to decide what form this would take. Nevertheless, it would set up a very difficult negotiation with Brussels, which, if it wants to play hardball, could scrap the entirety of the rest of the agreement.

Now, it is not difficult to see why this could have consequences beyond Switzerland’s relations with the EU (some would argue, it will also be another test of how the EU responds to referendum results). But, should the row escalate and other aspects of Switzerland’s trade cooperation with the EU be cut off, many would argue that it illustrates that a pick and mix UK relationship with the EU from outside (particularly a carve out from EU immigration that UKIP would favour) would be difficult or impossible to pull off. If, on the other hand, Switzerland was able to renegotiate its relationship to impose some form of restriction on EU migration, however minor, this would give those who favour UK exit an important precedent to point to.

For this reason, we suspect the EU will take a very hard line with the Swiss government if the Swiss people vote for quotas on Sunday.