This is interesting from today’s Handelsblatt. The paper has apparently seen the CDU’s draft manifesto ahead of the European elections. As a reminder: the CDU is Angela Merkel’s party, which, along with its sister party, the CSU, won a landslide with 41.5% of the vote in the last federal election. It’s what you would call the very definition of mainstream.

The CDU manifesto calls for an “an effective regulation brake” with decisions needing to be “effective and more transparent.” Interestingly, the CDU manifesto suggests that the European Commission should be required to scrap an EU law if a majority of national parliaments says it could be handled better at the national or regional level . This seems to be very similar to the idea of a “red card”, which we long have argued for and which Dutch Foreign Minister Frans Timmermans, for example, has championed.

Perhaps even more interestingly, according to Handelsblatt, the CDU draft manifesto  also explicitly states that:

“a repatriation of competences to the national level should be possible.”

This is significant since German politicians tend to avoid using the word “repatriation” – or Rückführung – since it has strong connotations, instead preferring a range of other more guarded expressions including Dezentralisierung, Regionalisierung, Übertragung, Subsidiarität and Verhältnismäßigkeit.

Handelsblatt’s take on this is that that the :

“CDU is reacting to growing euroscepticism in the country” including to anti-euro party Alternative für Deutschland (AfD).

However, the take of CDU’s campaigners is (as to be expected) that the party is simply becoming more realistic – which is a neat way of putting it: 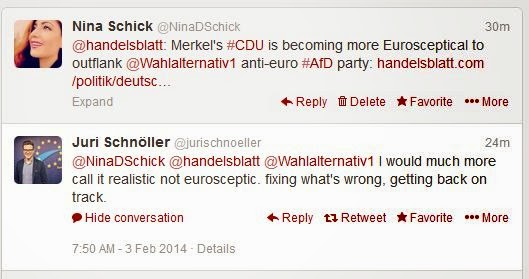 Meanwhile, the Today programme has an interview with Hans-Olaf Henkel – formerly the head of the BDI (The German equivalent of the CBI) – now with AfD.

Henkel argues that though he wants return of EU powers, he also wants Germany to stay in the EU. Today’s take on this is that “British sceptics may be disappointed” if they look to Berlin, concluding that “Even the German sceptics are not very sceptical when compared to their British.” Now, this isn’t necessarily right nor wrong — but just not very insightful.

This isn’t becoming too complicated for black-and-white labels, is it?