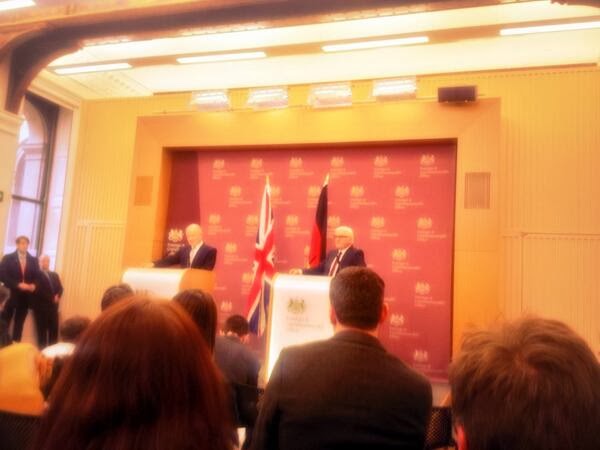 German Foreign Minister, Frank-Walter Steinmeier, is visiting his counterpart, William Hague, in London today. Although the visit doesn’t seem to have received much media coverage, we’ve just been at the press conference, and Herr Steinmeier had some interesting things to say. Unsurprisingly, Steinmeier said he wanted the UK in the EU.

Steinmeier said that the UK could play a pivotal role in making the EU more effective and competitive, but he also said that it was important not to “backtrack on European integration”, but it was not clear if he was referring to Eurozone integration – which the UK actually isn’t against. Hague opened the press conference, saying that both government agreed to work together to ensure a “fairer system” to all Member States in the EU.

Steinmeier also made clear that the EU should govern on the “big questions” – that it should rule where it is most effective. In this context, then, he said that there should be a further discussion on which competences would be best regulated on the national level. It was unfortunate that we didn’t get a chance to ask Herr Steinmeier to comment on CDU’s draft European Parliament election manifesto, which Handelsblatt reported on today as explicitly saying:

“A repatriation of competences to the national level should be possible.”

The German government – particularly the CDU/CSU wing continue to insist on Treaty Change in some form to provide more central control in the eurozone over spending. At the same time, Cameron wants a Treaty Change to institutionalise flexible integration including the possibility to pursue “less Europe”. The idea is to combine the two in a new grand bargain. Remember, last week French President Francois Hollande restated that Paris didn’t see Treaty Change as a “priority” for fear of a referendum (which would be politically hard to avoid due to the German-style Treaty Change, not the British one). This created headlines in the UK.

Steinmeier said that discussions over Treaty Change are far more nuanced than a polarised vision of Britain on one side asking for the all the Treaties to be opened up, and France on the other, resisting any such discussion – which is exactly what we’ve said. In fact, Steinmeier said he “welcomes a debate” and is “not against discussing an adaptation of the Treaties.” He added that there’s a debate raging in Germany at the moment over how to put Eurozone integration on a constitutionally and politically sound footing.

However, he also said that Germany and Britain aren’t completely aligned over Treaty Change, and, somewhat uncomfortably for Hague et al, argued that any major revision to the Treaties along the lines of what the UK is calling for, should perhaps be deferred until the eurozone stabilises further.  “It’s not just to do with the UK and Germany that some things are stalling,” said Steinmeier.

When asked the crucial question whether he believed that Treaty Change would coincide with David Cameron’s 2017 timeline, Steinmeier said it “was too complicated a prognosis” to be able to give a straight answer.

Steinmeier said that the Bundestag has set up a working group to present solutions on how square sensible rules on access to benefits with free movement. He said that the debate in Germany on free movement – while it was definitely was an intense debate – was in “sensible boundaries”, a nod to the UK press and its handling of Romania and Bulgaria.