Rien à voir ici? Hollande says treaty change is "not the priority" for France, but… 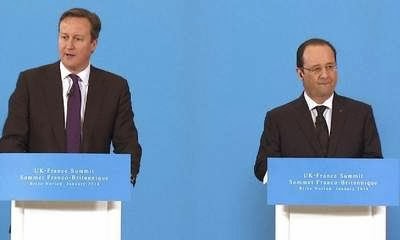 David Cameron and François Hollande have just held their joint press conference following the Anglo-French defence summit in Oxfordshire. Predictably, though, most of the questions focused instead on Cameron’s EU renegotiation strategy and the prospects of it being achieved by changes to the EU treaties.

Here’s what stood out for us:

A couple of points are worth making. It is no secret that one of the reasons France is wary of changing the EU treaties is that referenda are not exactly easy to win (think of the one on the EU Constitution in 2005, but also the one on the Maastricht Treaty, both of which split the country and the political establishment).

This is true assuming that the new Treaty gives the EU more powers. But this is not what Cameron is aiming for. So it is not entirely clear that any UK-led changes would necessarily have to be put to a vote in France.

That said, though, the common wisdom on this point is that an EU treaty change would be part of a ‘grand bargain’ to strengthen economic coordination in the eurozone – meaning that the UK’s new relationship with the EU would be negotiated alongside greater central controls in the euro area. This type of treaty change could clearly trigger a referendum in France (and elsewhere).

The question remains open. With Germany likely to keep pushing for an EU treaty change to complete the overhaul of the eurozone structures, we still think Hollande may have to face the issue sooner rather than later – with the question being what deal Berlin can broker.

And yet again, that brings us back to Angela Merkel.