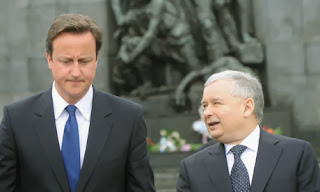 Much has been said and written about EU free movement, indeed the rhetoric has escalated in the weeks before the lifting of transitional controls on citizens from Bulgaria and Romania. The question of on what terms EU migrants should be able to access the UK’s welfare system – a crucial and sensitive issue – has been rolled into a wider debate about the costs and benefits of immigration per se.

While the tough message adopted by the government is designed to reassure a concerned public that EU migrants will not be a drain on the public purse, this has also generated a lot of concern among EU partners. While protests from the likes of Viviane Reding and Laszlo Andor will not cause anyone in Whitehall or Westminster to loose any sleep – in fact quite the opposite – the reaction from broadly sympathetic EU partners like Germany and the Netherlands ought to.
Today, even Poland’s largest opposition party Law and Justice (allied with the Conservatives in the European Parliament) stuck the boot in, letting it be known that leader Jaroslaw Kaczynski had personally written to Cameron to complain after the Prime Minister described Labour’s decision not to apply transition controls to the A8 countries in 2004 as a “mistake” and a “shameful dereliction of duty”.
In an interview with Polish Radio today, Law and Justice MP Marcin Mastalerek described Cameron’s comments as “unacceptable”, adding that:

“If Cameron does not revise his view on this subject it will make working together in the European Parliament exceptionally difficult”.

“This is a completely mistaken diagnosis of the situation. The British economy has earned billions of pounds thanks to the work of Polish migrants over the past 9 years… I think the letter from [former] Premier Kaczynski will provide Prime Minister Cameron with some valuable material.”

He added that he hopes the Polish government would also protest against Cameron’s words which “are hurtful to the hundreds of thousands of Polish citizens who are working to advance the welfare of the UK”.

Of course Law and Justice cannot afford to be seen giving Cameron a free pass on rhetoric that is seen as being hostile towards Polish citizens, so the tough tone is partially for domestic consumption. It remains to be seen whether the two parties really will struggle to work together within the ECR group.

Former Polish President Lech Walesa also joined the fray, accusing the UK of not appreciating how much they’ve benefited from the fall of Communism and of behaving “irrationally and short-sightedly”.

The wider risk – as we’ve pointed out in our recent briefing analysing the results of our simulated UK-EU negotiations – is that Cameron’s tendency to jump from headline to headline when it comes to EU issues risks alienating potential allies in his bid for reform.