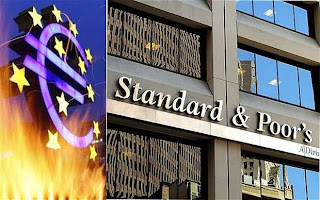 While the spate of EU downgrades has slowed to a relative drip feed this year, it turns out there was at least one left in the locker – the EU, which Standard and Poor’s (S&P) this morning cut from AAA to AA+.

Many may ask, does the EU even have its own credit rating? And if so why? The answer is, of course it does, although why is a bit more ambiguous. It relates mostly to the rating of the EU budget and any bodies which borrow with EU guarantees. This includes the European Financial Stability Mechanism, the smaller €60bn bailout fund which is backed by the EU budget.

The move is largely symbolic but the reasoning behind it is interesting if a bit strange in places:

In any case, the main impact is likely to be symbolic. S&P have choice timing delivering the news on the same day when there was much backslapping and congratulations over reaching a deal on the banking union.