Jumping from headline to headline isn’t a Europe strategy 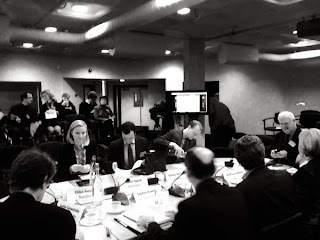 Our #EUwargames exercise has already received extensive coverage, but today we’ll publish our own, widely anticipated, analysis of the simulation (within the next hour or so).

In the Times, Open Europe’s Director Mats Persson trails the analysis. Bringing the simulation back to reality, he argues:

David Cameron heads to another EU summit today. The focus will be on the eurozone’s stuttering “banking union” but the PM will be stalking the corridors seeking support for EU reform. The good news is the appetite for change across Europe is growing. The bad news: Mr Cameron risks wasting the opportunity.

In a unique exercise, Open Europe has just “war-gamed” UK-EU negotiations and the results were instructive. Once the posturing is over, there’s scope for a range of reforms, including cutting the cost of Brussels and veto rights for national parliaments. Mr Cameron has achieved an EU budget cut and financial services safeguards but the exceptional statesmanship required forsweeping reform is lacking.

First, he’s fallen behind the curve. In January, he gave a good Europe speech but there was no follow-up plan. Mr Cameron had years to change the rules on benefit entitlements prior to Romanians and Bulgarians gaining full free movement rights but only now are changes being rushed through. Last-minute panic action will never deliver substantial reform.

Second, there are government malfunctions. On EU migration the Home Office, the Department for Work and Pensions and No10 have pulled in different directions. All governments suffer from internal tensions, but multi-party coalitions such as the Dutch or Finnish are far more joined up on Europe.

Finally, there’s a failure to understand EU partners’ interests. In our simulation, presented with evidence that France has the most to gain from limiting EU regional spending, Paris was open to budget reform. The UK must identify the reforms that could allow others to buy anygrand bargain. The deals are there to be done.

Mr Cameron should appoint a lead negotiator or an EU reform task force to co-ordinate work across all departments and tour national capitals testing ideas. France has successfully defended agricultural subsidies for decades using this technique. Jumping from headline to headline may work for domestic issues but on Europe, it’s a sure way to end up pleasing no one.