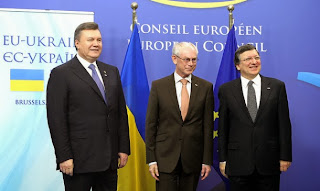 A deal between the EU and Ukraine involving a “deep and comprehensive” free trade area, finally seems to have the hit the wall, after weeks trying to reach an agreement.

Ukrainian president Viktor Yanukovich is now looking increasingly likely to sign a deal to join the Russian backed customs union instead. As the Russian deal is a customs union it is incompatible with Ukraine signing an individual agreement with the EU. Any further negotiations with Ukraine will therefore need to be jointly negotiated with Russia – something unlikely to prove easy.

Kiev (or its President) has chosen Russian over EU integration.

Ukraine is a big country and market, with 45 million people and substantial resources. It’s also a geopolitical hot spot, it looks both east and west, parts speak Ukrainian and are historically linked to existing EU members, Lithuania, Hungary, Austria and Poland. Other parts speak Russian and historically look to Moscow.

There are two ways of looking at this:

The EU’s “soft power” foreign policy – luring countries in by offering them gradual access to or membership of the EU’s zone of stability and trade – has hit its limits. EU enlargement as a foreign policy tool – betting on others voluntarily imitating the EU – worked as long as it could offer a haven to post-dictatorship countries in the Mediterranean and Eastern Europe, but without confronting the geopolitical orbit of hard power. With Ukraine, it has come up against precisely that in the form of Russia. Moscow offered its neighbour a binary choice: us or them. In a region still responding more to the whip than the carrot, the EU’s soft power proved highly limited. No amount of tweeting from constructivist-inclined EU foreign ministers will change that.

However, there’s a second way to look at it. The hundreds of thousands of pro-European protesters taking to Kiev’s streets show that, in fact, EU soft power is alive and well. Or at least, people in the EU’s neighbourhood still have a desire to join the club in some form. Therefore, and paradoxically, the stand-off between the EU and Russia over Ukraine simultaneously illustrates the EU’s greatest weakness and its greatest strength.

One final thought: I very much doubt that the protesters lining Kiev’s streets are voicing their support for the country joining the European Economic and Social Committee, or are particularly keen on plans to ban national flags (such as their own) from packs of meat, enforce quotas in boardrooms or prohibit refillable olive oil jugs in restaurants. They want to join a European club, broadly defined.

Those who press for more EU integration and increasingly want to make the EU an extension of the single currency should be aware that they’re also creating more hurdles for newcomers to join such a club. So far the “widening” of the EU has also led to “deepening”. With countries like Ukraine and Turkey in the game, that simply cannot continue. Scaling back the EU’s rulebook and allowing for differing levels of integration would lower the barrier to entry and therefore allow Europe to continue to use enlargement as a foreign policy tool.

The EU should want Ukraine and Turkey in but this won’t happen as long as “ever closer union” is the mantra. A new flexible model of membership is needed. It is also one that may help to some existing members feel more at home in the club.