A few surprises as the new German cabinet takes form

Over the weekend, following the ‘yes’ vote among the SPD membership, the composition of the new German cabinet was announced – almost 3 months after the election.

Despite, the outcome being broadly known there were a couple of surprises. Below we analyse the key points and personalities.

Jörg Asmussen (left) leaves the ECB board to join the Labour Ministry
This is probably the biggest surprise and could have some knock-on effects. Asmussen has stressed that he has stepped down from the ECB Executive Board to become Deputy Labour Minister (definitely a step down) for purely personal reasons. However, speculation will certainly arise over whether playing the bridge between the ECB and the Bundesbank had taken its toll on him.

The immediate front runner for the post is Sabine Lautenschläger (right), vice-president of the Bundesbank, although her nomination is not guaranteed since it has to be approved by all ECB members and get a (non-binding) endorsement from the European Parliament. If she does take up the post it could create headaches for ECB President Mario Draghi with the Bundesbank well known for its hawkish approach and its (sometimes open) disdain for the current loose ECB monetary policy. It could also be the case that the CDU/CSU only consented to the SPD’s Andrea Nahles – who had adopted an aggressively leftist position on the eurozone and German economy during the campaign – becoming the Social and Employment Minister on the condition that Asmussen would be there to push continued structural reforms.

First female defence minister – a successor emerging?
Another surprise was the appointment of Ursula von der Leyen as Defence Minister – the first time the post has been held by a woman. This remains a high profile and tricky position in Germany, with a significant international element. Von der Leyen has already been tipped as a potential successor to Merkel and this post could be the making, or breaking, of her. Either way, it shows Merkel accepts the need to cultivate potential successors, something she has previously avoided by side-lining the careers of those who have sought to take up the mantel. Von der Leyen is an outspoken supporter of European integration so it will be interesting to see if she pushes for more EU resource sharing and/or competence pooling in this area. 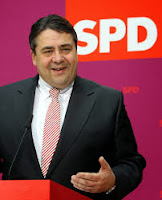 In addition to his role as Merkel’s deputy, the SPD’s Chairman Sigmar Gabriel will head up the newly created post of Economy and Energy Minister – hence his new “Superminister” moniker. This is clearly a high profile role, with Gabriel now in charge of the Energiewende – Germany’s shift away from nuclear and fossil fuels to renewable energy. It provides a great platform for him to launch a campaign for the Chancellery in 2017. That said, the move could also backfire. There are already rumblings in Germany about the cost of energy, a problem which will also increase with the shift to renewable energy. Furthermore, implementing the shift will present numerous problems and Gabriel could become the fall guy for any failures. As for the economy brief, the Finance Ministry has a strong hold over many economic matters and Gabriel could find his hands full with the energy brief.

Rebuilding the Franco-German axis?
As expected the SPD’s Frank-Walter Steinmeier returns as Foreign Minister, who we have noted before has a Francophile streak and has previously shown a willingness to disagree with Merkel. While his impact could be limited due to the Foreign Ministry being side-lined on EU and eurozone issues – now the domain of Merkel and Schäuble – Steinmeier could still work to rebuild the partnership with French President Francois Hollande.

Other notable points include the appointment of Peter Altmaier to head the Chancellery (i.e. become Chief of Staff to Merkel). He has a keen interest and knowledge of the EU, but as previous head of the German arm of the European Federalists, he could provide a further challenge to UK Prime Minister David Cameron’s push for EU reform. The outspoken Hans-Peter Friedrich has been moved from the Interior Ministry to Agriculture, a less high profile post after he took significant flak for his handling of the NSA spying issue. Viewed from London this is a regret as Friedrich took a hard line on the need to reform EU free movement rules to prevent abuse by so-called ‘welfare tourism’.

Overall, the CDU holds five ministries, the CSU three and the SPD six. Much has been made in the negotiations about Merkel giving up too much power, but we’d be careful of underestimating her. Given her strong position it’s unlikely she would have given up more than is necessary, and she has maintained hold over the key ministries and the key points of the agenda. There has been some tinkering on the edges of labour policies and spending priorities, but the approach of cutting the deficit and bringing down debt remains vital. Her procedural step by step approach also remains.

One thing that is clear is that the SPD is heavily invested and supportive of this coalition and there can be no chance of them shirking their responsibility. Whether this will prove positive for them at the next election remains to be seen.