The Slovenian Central Bank this morning released the long anticipated results of the stress test of Slovenian banks. The full results can be found here, while the press release is available here and a reader-friendly Q&A here.

The release did not begin well, with the English feed of the conference proving slow and laggy – similarly to the tests themselves, whose results have been delayed a couple of times. Beyond that, though, things went much as expected, with the tests showing a €4.8bn hole which needs to be filled, around the expectations of €4bn to €5bn. Below, we lay out our key thoughts: 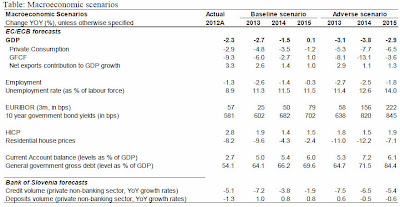 The macroeconomic scenarios include some optimistic export numbers. As we have said before for Slovenia, and others, relying on exports alone to prop up GDP can be a risky game.

The tests are based on data from the end of 2012. This is a problem with these tests in general, but has been exacerbated by delays in the case of Slovenia. The data are one year out of date – a year where the Slovenian economy has struggled, and non-performing loans held by banks have increased steadily. 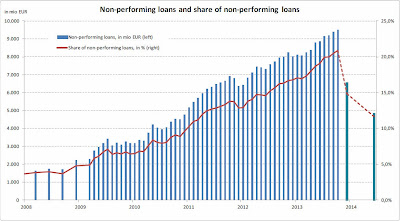 The €4.8bn figure is taken from the adverse scenario, and it’s not exactly clear why this is done when the figures shown under the base scenario are normally used in these tests. This could be seen as an attempt to be ‘extra conservative’, or a sign that the base case is a bit outdated in terms of projections or data.

The largest banks will also transfer €1.7bn in non-performing loans to the country’s bad bank – exactly what price this will be at remains unclear. It is also unclear if the bad bank will require further state support. Overall, this is a huge amount of support for the largest banks in the sector. The remaining small banks will be forced to raise around €1.1bn through private sources before June 2014. If they fail, then the government may step in once again (although this will certainly involve further bail-ins).
As a result of this bank recapitalisation, Slovenia’s government debt will rise to 75.6% of GDP. Not massive by standards of the eurozone crisis, but high enough that we could see upward pressure on borrowing costs, especially given the poor growth outlook for the economy. It also means that both the public and private sector in Slovenia is heavily indebted. This risks weighing on the economy, and could potentially create a downward spiral as domestic demand, investment and government spending falls.
One of the more astonishing figures (to us) is that the stress tests cost €21 million (around 0.06% of GDP) to conduct, due to fees for the consulting firms such as Oliver Wyman, Roland Berger, Ernst & Young, and Deloitte.
So far, then, Slovenia has managed to avoid the need for external aid, despite a significant overhaul of its banking sector. However, the economy remains in a fragile state, and any shocks to the system over the next six months, as the overhaul takes place, could push the economy into a wider and deeper crisis.
Author : Open Europe blog team
Print